By Team Bollyy On Aug 17, 2018
766
Share
Stars and their fans are inseparable and there are several stories of how actors have made their fans feel special. Kartik Aaryan has one such tale to tell. The actor who has become super-popular among the masses post the success of Sonu Ke Titu Ki Sweety, was recently shooting in Gwalior for his next film Luka Chuppi and guess what? He had two of his fans land up on the set who wanted to catch a glimpse of him. What the fans didn’t know that this experience of meeting Kartik will be one of the most cherished moments in their life. 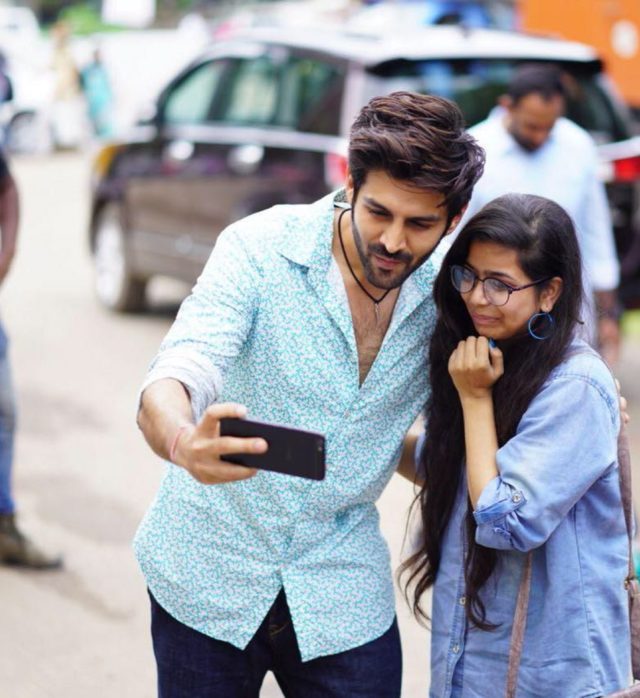 There is hardly any dull moment when Kartik Aaryan is around. When the actor was shooting for Luka Chuppi, he had some free time between the shots, and instead sitting in his vanity van, he was seen playing football with the team. And that’s the time when two of his female fans landed up on the sets. When they saw their favourite actor at his candid best, they couldn’t believe their eyes. For anyone else, they would have jumped with joy watching their favourite actor, but the girls were soon in tears. They were moved so immensely by watching Kartik being so humble and non-starry, that they began to cry. Kartik instantly met them and oblidged selfies. Obviously his warmth and love made them really happy and they are surely going to have sleepless nights for few days.
Kartik Aaryan has Dinesh Vijan’s Luka Chuppi and the Hindi remake of Kirik Party in pipeline. Both the films are said to be super-entertainers and something what Kartik Aaryan aces in. And we are all ready to watch this bromantic hero on the big screen.

Taapsee on working with both Senior and Junior Bachchan

On National Girl Child Day, watch these movies that discuss…