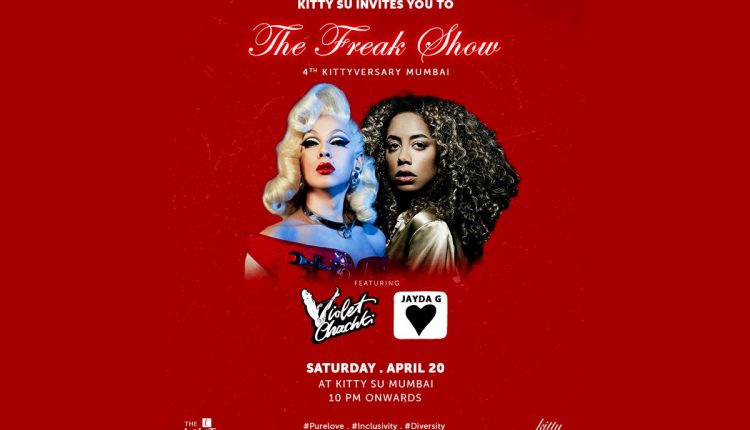 Four years of celebrating the rebels, misfits, and freaks in Mumbai, Kitty Su is the definition of unabashed acceptance. Kitty Su’s anniversary bash on April 20, 2019, will be marked by wild celebrations.After acing the stage at RuPaul’s Drag Race, and giving fire to the drag trend at Kitty Su in 2017, Violet Chachki is back to boss the freak show in Delhi and Mumbai. The gang of crazies also features globetrotting DJ and music producer Jayda G, one of world’s leading electronic music players. Other queens to grace the stage are Maya The Drag Queen, Betta Naan Stop and Zeesh Ali. Since its inception, Kitty Su has been a path breaker, giving a platform to the marginalized communities. Local drag divas have found their true calling at the club, while differently-abled people have received a welcoming environment. A hub of change and flag bearer of inclusivity, Kitty Su is known to break stereotypes. Music is the medium for Kitty Su’s crazy escapades, and you can expect the birthday bash to become the talk of the town.

Jason Dardo, known by the stage name of Violet Chachki, is an American drag queen, burlesque dancer, recording artist, television personality, and model, known for winning the seventh season of RuPaul’s Drag Race. Violet Chachki is known for her burlesque performances and aerial work, including aerial silk and aerial hoop. In January 2017, Dardo joined The Art of Teese, a neo-burlesque show headlined by Dita Von Teese. In November 2017, Dardo became the first drag queen in a major lingerie ad campaign, for Bettie Page Lingerie. In January 2018 Dardo walked for Moschino in their Fall 2018 Collection at Milan Fashion Week. Jayda G is a Canadian music producer and DJ that moves back and forth from Vancouver to Berlin. She produced her first release under the Australian label, Butter Sessions, and now Jayda G has started a new record label project called Freakout Cult. The inspiration for forming their own label came from the Freakout Cult Club Night that Jayda G and DJ Fett Burger hosted in Vancouver.