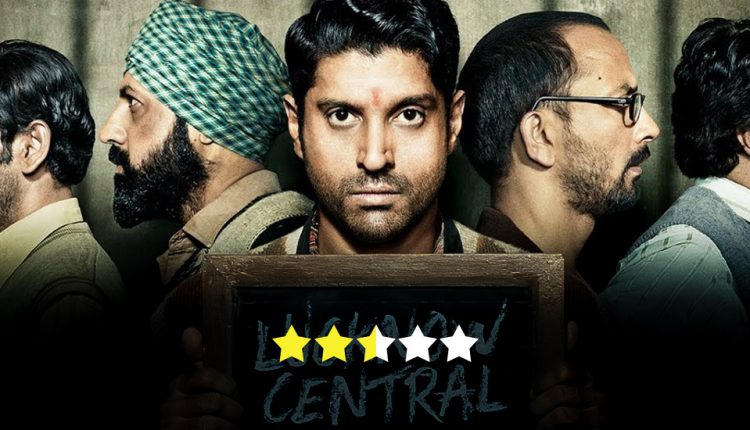 ‘Shehar chhote hote hai, sapney nahin‘—this is the force that drives Kishan Mohan Girhotra (Farhan Akhtar), an aspiring singer in Moradabad, whose biggest dream is to form a band and rule the hearts of millions of music lovers around the world. Unfortunately, tragedy strikes when he is falsely implicated for the murder of an IAS officer and is sentenced to life imprisonment in the Lucknow Central Jail. A flicker of hope arises in Kishan’s life when he learns about the formation of a band within the jail premises to perform at a competition featuring bands representing various prisons in the state. With the help of an NGO worker Gayatri Kashyap (Diana Penty), Kishen forms his band with ‘bandmates’ Victor (Deepak Dobriyal), Panditji (Rajesh Sharma), Dikkat (Inaamulhaq) and Parminder (Gippy Grewal). But, as Kishan says, “Plan kuch aur hai”! What is the plan after all? To find that out you’ll have to head to the theatres but is Lucknow Central worth your time and money? Will a musical-thriller, a relatively less-explored genre appeal to the audiences? Will Farhan Akhtar be able to create the magic of Rock On? We saw the film and here’s what we took away from Lucknow Central

Farhan Akhtar tries really hard to get into the skin of the character but sadly, he somehow manages to just squeeze in. His flawed English comes across as a bit weird in some scenes and looks forced. Overall, Akhtar is just about fine; definitely not at his best! Diana Penty is good and does justice to whatever screen time she gets. However, what fails is that the character, in the first place was really poorly written leaving Penty with nothing much to do. Ronit Roy and Ravi Kishen are in top form and infuse a distinct flavour of humour to the plot. The rest of the cast, Deepak Dobriyal, Gippy Grewal, Rajesh Sharma and Inaamulhaq put up a good show and prove why a good supporting cast is as important as the lead actors.

As they say, first times are always special. Debutante director Ranjit Tiwari, being a first timer, makes a good attempt with a film based on true incidents. He doesn’t waste time and straight-away dives into the main plot in the first 15 minutes of the film itself. Furthermore, one just cannot ignore the striking resemblance with Yash Raj Film’s Qaidi Band which hit the theatres a few days back. It’s not just the theme and the scenes, but the two films bear an uncanny resemblance on many levels. Having said that, Lucknow Central has its moments. There is enough thrill to keep you invested barring a few scenes which do nothing but add to the runtime of the film while defying logic.

Cinematographer Tushar Kanti Ray has managed to do a fairly good job with the film and makes it visually intriguing with some really well-composed frames. The editing of the film is fairly good and the pace and rhythm is well-maintained. There are variations in the pace of the film which keeps the proceedings going with only some dull moments which could possibly be because of the long duration of the film (147 minutes).

While the film revolves around the theme of music, it lacks that magical touch in this department. Except for Kaavaan Kaavaan, none of the tracks stay back with you. Big thumbs down here!

To sum it up, I’ll quote Orson Welles who once famously said, “Nobody gets justice. People only get good luck and bad luck”.  So, if you’re having a good day and luck is on your side, you could give Lucknow Central a miss! On the other hand, if you’re just looking to kill time over the weekend and want to step into a cinema hall with zero expectations, give it a dekho! For me, it’s 2.5 out of 5.

OMG! THE DRAMA COMPANY TO BE REPLACED BY SUNIL GROVER’S SHOW ON SONY?

SIMRAN IS A TRIBUTE TO KANGANA’S EXCEPTIONAL ACTING SKILLS