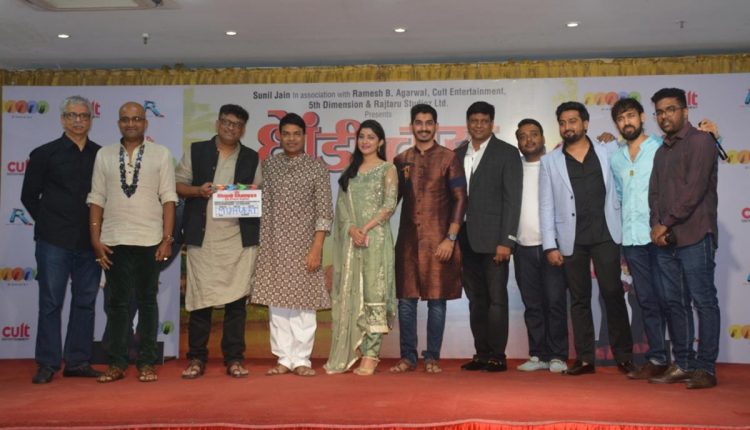 The Mahurat ceremony of Marathi film “Dhondi Champya Ek Prem katha”  took place on Saturday by seeking blessing at Siddhivinayak Temple,Worli . In the presence of Media the entire cast and crew announced that the shoot will commence soon and plans are afoot to release in Deepavali this year.The movie is written and directed by Dnyanesh Shashikant Bhalekar. The film is produced by Aditya Joshi, Alok Arbind Thakur, Aditya Shastri and Venessa Roy.Bharat Jadhav, Vaibhav Mangle, Nikhil Chavan, Sayli Patil, Shalaka Pawar, Sneha Raikar star in the movie. Music will be composed by Saurabh – Durgesh and lyrics are by Guru Thakur and Mandar Cholkar. The story line of the film based on Uma and Ankush who are farmers from same village but don’t see eye to eye since ages because of a family feud and hate each other. Uma`s son Aaditya and Ankush`s daughter Ovi fall in love with each other, which leads to a series of funny and dramatic situations. In spite of strong reservations from Umaji, his buffalo, Champya is impregnated by Ankush`s bull, Dhondi. This leads to a funny, hilarious and tense situations.  And hence begins the hilarious drama.The young couple tries to mate the buffaloes to get their respective fathers to agree to their marriage.