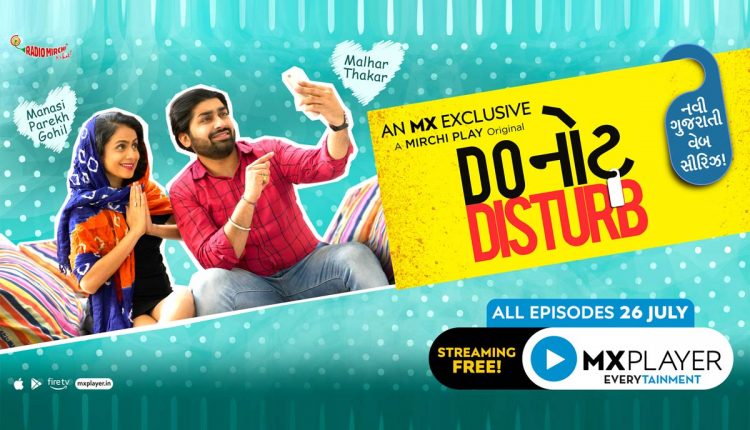 What does it feel like to be married? Having romantic dinners for two, lovely vacations with your beloved, one peone on movie tickets – basically a beautiful life with you and your wife! But in reality – it’s about two individuals struggling to spend quality time with their better half – be it because of a family dinner or a failed plan for a romantic trip because they need to attend a family function. Raising a toast to these situations and the conversations that flow in the bedroom of a modern couple – MX Player brings a new Gujarati MX Exclusive Series “Do Not Disturb”. This romantic comedy tells the tale of marriage, but through a keyhole and will stream for free, 26th July onwards only on MX Player.

This 6 episodic seriesrevolves around the lives of Maulik (played by MalharThakar) and Meera (Essayed by Manasi Parekh Gohil) who live with Maulik’s parents.  Maulik is your typicalAmdavadi boy – loves food, respects traditions, partying with his friends, keeps his parents above everything and loves his wife. Meera is a Gujarati girl and a Mumbai-chi mulgi at heart. She’s progressive, modern and adores her hubby. Do Not Disturb, directed by Sandeep Patel of Love Ni Bhavai fame and penned by Mitai Shukla Nehal Bakshibrings to life the intimate conversations between the husband and wife, the difference in opinions and the compromises they make for their love.

At the trailer launch, Manasi Parekh Gohil said, “This project is very close to my heart as I am also the producer for this series. Working with Malhar& Sandeep has been a dream come true! I have loved every single second that I spent with this cast and crew. The series has so many such incidents that every married couple must have experienced in their life. I hope that the viewers enjoy it as much as we did while making it.”

“I feel web needs more energy as compared to filmsand thus, we have put in a lot of effort and given our 100% for this project. ‘Do Not Disturb’ is my digital debut and what appealed to me is that it is a simple yet funny story that encapsulates the everyday conversation that takes place between a couple – but within the four walls of their bedroom. And, of course – working with Sandeep Patel is always fun”, said MalharThakar.

Please Ignore the ‘Do Not Disturb’ and stream in to watch the series for free,
only on MX Player starting 26thJuly, 2019

Top Gun Returns As Maverick To Theatres In 2020

Amyra Cuts Fee For A Good Cause