DID MANISH MALHOTRA CONFIRM HIS RELATIONSHIP WITH KARAN JOHAR?

Link ups and breakups are common in Bollywood. When you are in the industry, you just have to deal with it. Recently came the reports of Manish Malhotra confirming his relationship with Karan Johar, leaving people in shock.

Karan Johar and his BFF Manish Malhotra’s personal life is often under scrutiny. According to a report in Pinkvilla, Bollywood’s ace fashion designer confirmed his relationship status with KJo on social media. This all happened when Manish Malhotra shared a picture with Karan Johar to wish him on his birthday and captioned it, “Happy happy birthday my dearest bestest friend @karanjohar have a wonderful year ahead 25!years of friendship and working together..and many more years to come and may you keep making the most wonderful films and keep being the spirited person that you are #karanjohar #friendship #friendslikefamily #Bff @mmalhotraworld.

The post by Manish was bombarded with wishes for Karan Johar and amongst the wishes, there was one wish that stated; “You guys are the cutest couple.” Manish later liked the comment, and thus starting all the reports of him confirming his relationship with Karan Johar. 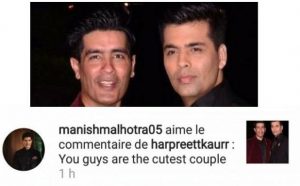 Later, The Times of India contacted Manish Malhotra to know the truth, and Manish said; “Karan is like a brother to me. It’s just ridiculous”.

IN ZERO, SHAH RUKH KHAN WILL REPEAT WHAT HE DID IN SWADES