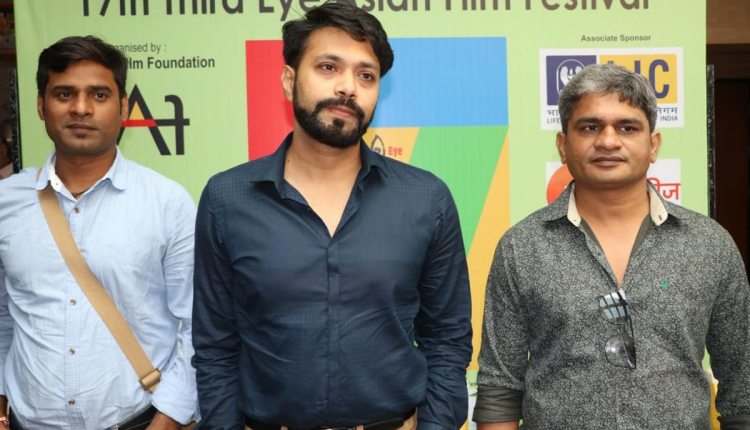 Films which are being nowadays on teachers and students are few and far between and very less in numbers but director Aditya Om has made a very thought provoking film on students, teachers and education called Massab. Recently at the 17th Third Asian Film Festival held at Citylight in Matunga Road, Massab was showcased to the media and the delegates in the presence of the director and his cast and crew and drew a lot of applause for its praise worthy out of the box content.The plot of the film which was shot at Bundelkhand revolves around a honest teacher who changes a school in a village into a role model. The idealistic teacher does not view education as a tool to earn money but to dispel the darkness in society on the whole. On the occasion, Aditya Om reiterate that his film has been showcased in over 14 different festival  in India as well as abroad and bagged over a dozen prestigious awards. He added, “It is the third screening of the film in India after Jagran Film Festival in Mumbai and the Kolkata International Film Festival and we are extremely happy with the response the film has been garnering. When we set out to make the film, we did not at all anticipate that we would get such a wonderful response. It is an entertaining film though it drives home a poignant message to the audiences.”

Aditya Om, a popular actor in Telugu films, who had earlier directed Bandook in Hindi says, “Shiva Sooryavanshi plays the lead role in the film. It is his first in Hindi and he has essayed his role effectively as the teacher. My film shows the importance of educating in small villages and towns. The film is slated for release next year in April or May and we are now in the process of showing it to various Ministries because we feel that it will benefit the film if the government comes forward to promote the film by granting it a subsidy and show it in schools so that it will inspire other filmmakers to make purposeful films. In the current scenario, it is just impossible for filmmakers to make purposeful films. I am confident that my film will fetch even the National award.”

Lyricist Guru Thakur Takes To Playback Singing Too With Krutant