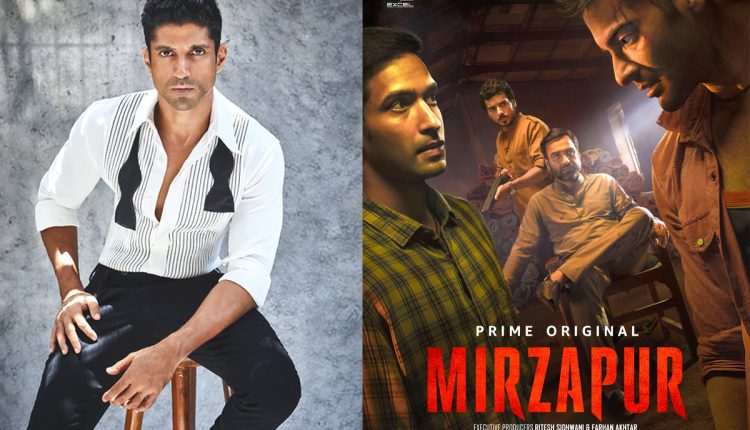 “Mirzapur Is Not Meant For The Faint Hearted” Says Farhan Akhtar

Amazon Prime Video and Excel Media & Entertainment released the trailer of the Prime Original Series – Mirzapur. Set in the heartland of India, Mirzapur revolves around drugs, guns and the politics of power in a land where might is right. Created by Karan Anshuman & Puneet Krishna and directed by Gurmmeet Singh, Mirzapuris a nine-episode series that will be available to stream exclusively on Prime Video from November 16, 2018 across more than 200 countries and territories.  An edge-of-your-seat binge-watching experience, Mirzapur is a gripping narrative brought to life by a power-packed cast including highly acclaimed and award-winning actors such as Pankaj Tripathi, Ali Fazal, Vikrant Massey, Divyendu Sharma, Kulbhushan Kharbanda, Shweta Tripathi, Shriya Pilgaonkar, Rasika Dugal and many more.  Vijay Subramaniam, Director & Head, Content, Amazon Prime Video India, said, “With Mirzapur, we reiterate our commitment to bring new, ground breaking shows to Indian and global audiences with high caliber production values and exceptional content creators and talent. More importantly, we remain committed to taking stories from India that are local in narrative yet epic in scale to a global stage. If the global launches of Inside Edge, Breathe, etc. have taught us anything, it is that high quality Indian content has found resonance with audiences around the world and there is a growing appetite for the same”. Mirzapur isthe fifth Prime Original Series offering from India and brings together the winning trio Ritesh Sidhwani, Karan Anshuman and Farhan Akhtar,the creators of Prime Original Series, Inside Edge that recently earned an International Emmy nomination for Best Drama Series (the first-of-its’s-kind for a video-on-demand series originating from India). Ritesh Sidhwani, Excel Media & Entertainment, said, “A genre-defining, bold and powerful story like Mirzapur with high production value and scale takes it to the next level of cinematic experience. We are taking a story set in the heartland of India to a global audience& are excited to see how viewers respond to it.” Farhan Akhtar, Excel Media & Entertainment, said, “The success of Inside Edge reaffirms our faith in digital streaming in India, proving that these are indeed exciting times for storytellers, artists, writers and filmmakers. Mirzapur is a story not meant for the faint hearted and it will make people think about the show for days after watching it.”