Every film has its moments. Some worth remembering and others that make us want to forget it as soon as possible. But there are very few films that can conjure up memories and make you feel nostalgic decades even after they were made. Dharma Productions’ 1998 venture, Kuch Kuch Hota Hai, was exactly one such film. Despite all its flaws, it is a timeless piece, made so by all of the moments you can still connect with 19 years later.

2. That feeling of getting separated from your best friend

If you’ve ever had to say goodbye to a best/really good friend, this is the scene that brings it all up for you.

What memes are today, Rahul-Anjali’s banter was in the 90s when there was no Facebook or Twitter. Similar jokes, pulling each other’s leg, all of it. The only way you can’t relate to this is if you don’t have friends. 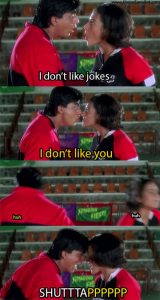 4. The importance of mothers, portrayed so aptly in this one scene

Maa, indeed is everything. 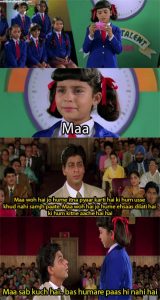 5. Wishing on a shooting star

You got the concept from here.

Congrats team KKHH for completing 19 glorious years, thanks for the memories! If you think we missed out on any of the moments, let us know in the comments.