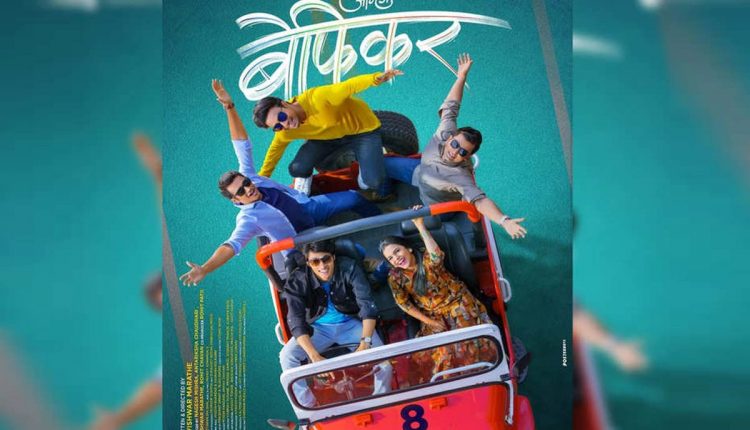 For, by and of amateurs!

Amhi Befikar is less of a film and more like a cautionary tale about the dangers one encounters when one sets out to make a film. Ironically, it’s a film within the by the film enthusiasts, featuring the story about aspirants who want to desperately make a movie battling against odds that come their way. It is the story of Raghu (Suyog Gorhe) and his friends (Rahul Patil, Swapnil Kale, Akshay Hadke and Devroop Sharma). Raghu is in love with Mitali Mayekar’s character. The crux of the plot of the film seems to be what happens to their friendship, but somewhere on the way, the director dilutes the sweet little love story with the angle of betrayal and crime, without being able to do proper justice to it.

Though it must be lauded that the film sets out to portray the youngsters  in the right spirit, it looks far to huddled , what with a lop sided script which starts go8inbg haywire half way though and the director just forgetting how exactly he wants the script to be executed on the celluloid. Music and lyrics by Pranay Adhangale is brilliant but unfortunately it has not at all been promoted.

For a film which has been designed for the youth and as a tribute to the women empowerment, it does shock you that it objectifies women with double entendre dialogues in  many ways including a comic reference to a college student Bhai (Devroop Sharma) who is offering to finance the film provided he is given a role as a rapist. In another scene, two characters meet at an urban cafe, but decide to immediately go and eat at a Dhaba, because you just cannot logically have an item number at a café. The characters lack depth and script is full of clichés and logic gaps, including lack of detailing.

Suyog Gore is promising as Raghu while Mitali Mayekar is very endearing as Bhargavi and scores too in the acting department. While Devroop Sharma induces laughter in his scenes, he tends to end up too loud at times as Bhai, while Murli Sharma as the father of one of the boys is just about passable. To sum up, it is a film which is an enterprise of, by and for amateurs and looks like it is a jaded TV serial which has several episodes strung together. No wonder there were hardly 10 to 15 in the theatre when the show was on yesterday, because of Instead of encouraging Marathi films by reducing the admission rates, with theatres like Plaza charging Rs 500 for a recliner seat in a middle class locality like Dadar, how can you expect a Marathi manoos to patronise a Marathi film like this?

Hrithik Roshan Delighted To Be Associated With Donear As Ambassador