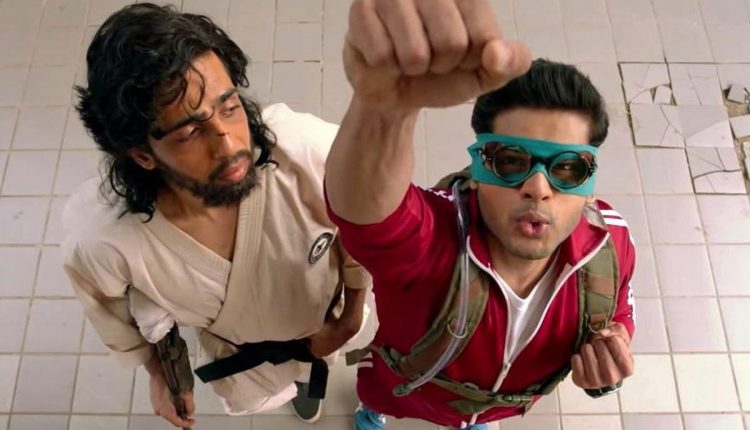 Surya (debutant Abhimanyu Dassani) has a rare (superhero) disorder. He can’t feel pain. His conjugal disorder This makes him a misfit — a social outcast, who grows up to believe that he is Karate man, a self-proclaimed vigilante who must fight the bad guys, like the ones who killed his mother (Shweta Basu Prasad (Shweta Basu Prasad).

Vasan Bala’s second feature (his first, Peddlers, remains unreleased) is a all in one combo of nostalgia-doused nod to Bollywood masala, peppered with identical twins, childhood sweethearts, and stolen lockets, as well as the cheesy movies which featured such lean-and-mean martial arts heroes like Bruce Lee and Jackie Chan.

In this plot-less movie, our protagonist Surya’s  killer karate moves is evident right through the film, as he goes about saving the world. Without having any scratch on his muscular body, he goes after chain-snatchers and locket thieves and set out to rescue the girl he loves.

Abhimanyu Dassani has a pleasant countenance and is earnest in his attempt to act. Radhika Madan replicates her Phataka character to the core and is cute, matches Dassani fist to fist and foot to the foot in the action department and kicks serious ass, though it must be said that her back-story isn’t entirely convincing.

Mahesh Manjrekar is clearly having fun as Ajoba, Surya’s genial and affable grandpa, while Devaiah in a typically clichéd double role, as the bad guy Jimmy in oversized red plastic glasses, snapping orders at his henchmen is to say the least hilarious to the core with his Tamil accent as Karate Mani.

To sum up, despite its refreshing take on superhero movies and filmy fever, I must say that the not-so-novel story seems too stagnant and far too stretched in portions, with far too many loopholes in the starched screenplay which could have been avoided. It also takes a while for you to slip into Suraj’s fantasy world of crazy heroism.

The First Look Of Ajay Devgn, Tabu And Rakul Preet Singh Starrer De De Pyaar De To Be Out On Ajay Devgn’s Birthday On April 2