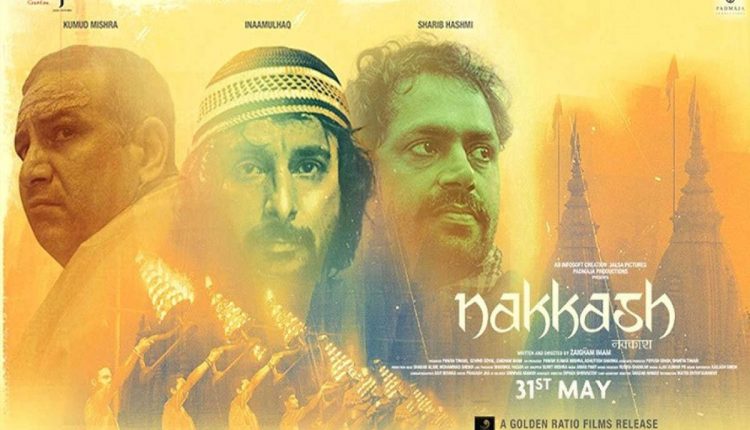 A Rare Gem of a film

The film is about a gifted craftsman – Alla Rakha (Inaamulhaq) who faces ostracism from all quarters and struggles to admit his only child Mohammad in a religious school, owing to his dedication towards his craft that leads a poor Muslim like him to take up the job of designing sculptures of gods and goddesses of Hindu religion. The plot is about a bully of a politician trying to capitalize on the mounting tension between the Hindus and Muslims, police brutality and one man’s struggle to march on the path of humanity over fanaticism.

Zaigham Imam’s Nakkash follows his previous efforts Dozakh in Search of Heaven (2015) and Alif  (2017) in trying to carve out a middle path between heightened religiosity and inter-faith tolerance. Continuing in his mission in the same vein the writer-director Zaigham Imam has done his homework right because of the vibe this drama exudes – right from the dialect to the choice of garments each and every incident falls right into place. The end, frankly a bit predictable, leaves the audience moved and in an emotional state of mind. Also, the background score is perfectly aligned with the storyline. The highlight is the gayatri mantra painstakingly recreated in Urdu.

In spite of its positive points, the film falters is in ratcheting up the drama around the subjects: Sharib Hashim as the best friend who goes over to the radicalized, proselytizing side of Islam and succeeds in adding some rare sparks to the film, while Inaamullaq steals the show with his subdued performance. Pawan Tiwari as the right-wing politician whose ambitions override the beliefs of his pundit father (Mishra) and the local cop (Rajesh Sharma) have predictable arcs. Kumud Mishra as Vendanti , the head priest of the temple where Alla Rakha works is simply excellent and rises above his role with a lot of restraint. To sum up, in these troubled times, a film like Nakkash is a gem of a film which tries on its own level to mitigate religious chasms in its own way

The Government Should Work Towards Peace, Brotherhood And Prosperity, Says Jameel Khan