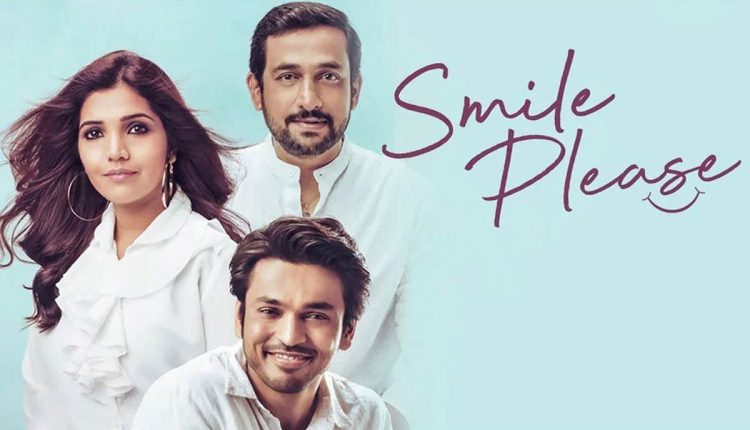 The film Smile Please has shades of Phadnis’ maiden directorial, Hrudayantar, in terms of the family setup, support system and treatment of the film. But the fashion designer-turned-director shows a more mature approach in this second attempt of his, as a director with a lot of sensitivity.

The film revolves out and out around the life of Nandini, a fashion photographer, who is in the middle of a presentation when she forgets words midway. Nandini is a divorcee who is now living with her father while her husband has taken the custody fop their only daughter is living away from her on his own. She also forgets to pick her daughter Nupur ( Vedashree Mahajan) from school . Is this due to lack of rest or something more?

The film sets out to take an objective albeit bold look at the World Health Organization figures which point out in the end credit titles that, more than 50 million people across the world live with some form of dementia. But sadly we tend to live our lives in denial and it is not unless someone close to us goes through this that we take notice.

Nivedita finds a good friend and confidante in a new person who enters her life in the form of Viraj (Lalit Prabhakar), who comes to live at her father’s (Satish Alekar) house as a guest for a while. Her ex-husband (Prasad Oak) regards her dementia as an incurable disorder, but Viraj becomes a friend and even goes to the extent of encouraging Nandini to live life as beautifully as she can and teaches her joy in the form of watering the plants in the garden of her bungalow

Thankfully, the director tackles his film with sensitivity and though he could have introduced a romantic angle with the mother with a daughter, he restrains himself and does not project that kind of an amorous side to either Nandita or for that matter Lalit, though he does show the ex husband getting disturbed with the presence of the other man in her life.

Mukta Barve, needless to add is the life of the film though one must concede that Satish Alekar also lends a lot of dignity to his character as the helpless father. While Prasad Oak is impeccable as the husband and does justice to his role, it is Lalit Prabhakar who steals your heart with his presence and even manages to rise above his role though it is not at all author backed.

Three cheers to costume designer Vikram Phadnis who has made a poignant albeit breezy film with an urban setting which though you may feel is very heart- rending, is actually heartwarming and extra sensitive. Don’t miss it. It his even better than his first Marathi film Hrudayantar

I Was Always Confident That Yeh Rishta Kya Kehlata Hai Will Do Well!, Confesses Rajan Shahi