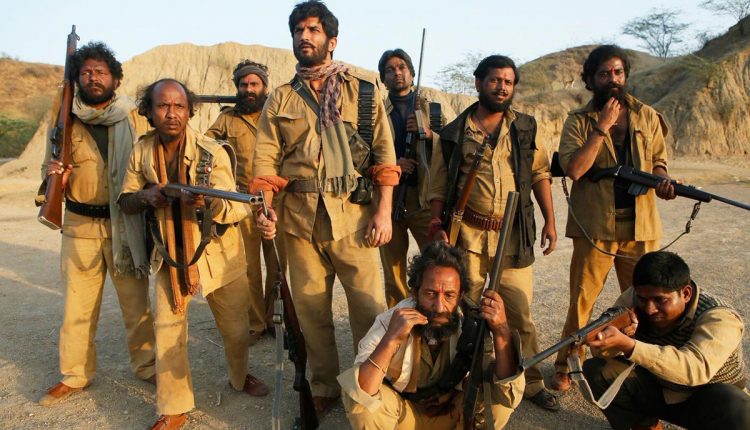 Set in the ravines of 1970’s Chambal, the film follows a bunch of dacoits led by Man Singh (Manoj Bajpayee) as they battle with the cops and their own conscience. Sonchiriya sets out to tell about rebels and ravines in the Chambal, but thankfully for a change without the usual trappings, though it is a tad difficult for the aam aadmi to fathom the hardcore language and the dialect of Bundelkhandi.

The story of this black and realistic film which looks dark almost throughout is simple, about many outlaws on the run. Full credits to the shots caught breathtakingly by Anuj Rakesh Dhawan. It may be Chaubey’s best crafted film, but feels superficial by way of metaphor. Like the characters tormented by ghosts of their guilt see these ghosts frequently and are haunted a lot.

The film is basically about redemption. Though centered on dacoits, cops, gun battle, ambush and dangerous confrontations in the dark of the night, it isn’t really about crime but the curse that follows the perpetrators of violence. Definitely Abhishek Chaubey is craft-wise very superior to the one he had displayed earlier in both Ishqiya as well as Dedh Ishqiya.

Ranvir Shorey plays with aplomb the various shades of his character Vakil Singh while Sushant Singh Rajput plays Lakhna with effortless ease and the baggage of a beard and moustache In a brief role in a special appearance, Manoj Bajpai is excellent as a rebel chief Maan Singh aka Dadda, holding up a wedding after picking up a dead cobra on the butt of his rifle with effortless ease, while Bhumi Pednekar, a desperately busty and fierce woman called Indumati on the run, holds her own strongly. Ashutosh Rana is competent as usual as the righteous cop with his mission of bringing the bandits to book.

It’s always easy for a film critic to pin point that there were a lot of similarities in films like Bandit Queen and Paan Singh Tomar which also had the same canvas, but instead of blaming the director for that I think we should praise him for tackling a complex subject like this with mainstream actors