Sunny was chosen the final winner for this category amongst the 2 other nominees who acted in different films showcased at the festival.  After its premiere in MAMI 2018, along with DFW SAFF, NIFF, Chippa was also screened at various International film festivals like: Indian Film Festival of Los Angeles, Mipcom & others.  Written and directed by Safdar Rahman, Chippa : A coming of age film of a 10 year old boy narrated across a single night features Sunny Pawar as a 10 year old main protagonist.  Sunny’s debut film “Lion” in which he played a child version of Dev Patel was nominated in 6 categories at the 89th Academy Awards in 2017 & has won him International accolades & awards.DFW SAFF is a 4 day festival that took place from May 16 to 19, 2019 and showcased World, U.S.and Texas premieres of feature films,shorts and documentaries. The festival also showcases a wide range of films that promotes the perspectives and voices of the South Asian community.Chippa is a story about the aspirations of a child who lives on the streets, told through a journey he takes into an enchanting world that he creates himself on one wintry night in Kolkata. The film is an endearing & universal homage to the spirit and the timeless stories of children growing up everywhere. In “Lion” Sunny Pawar was also nominated for the Critics Choice Awards in the “Best Young Performer” Category, “Best Actor” by AACTA Awards, “Special Mention Grand Jury Prize” at Asia Pacific Screen Awards and a nomination for the “Young Artist Award”.Chippa is a heart-warming story of a boy, who on the eve of his tenth birthday receives a letter from his long-absent father. He then decides to leave his pavement abode to find out more. The film spans the length of the single night which tracks the fantastical & eventful journey which Chippa takes to discover the connections to his father.The film has a supporting cast of Chandan Roy Sanyal, Masood Akhtar, Sumeet Thakur & Mala Mukherjee in pivotal roles & is produced by Ultra Media, Travelling Light & Victory Media. The film will also visit many other International film festivals before its theatrical release

1) Photographs of Sunny Pawar with the Dallas Film Festival award 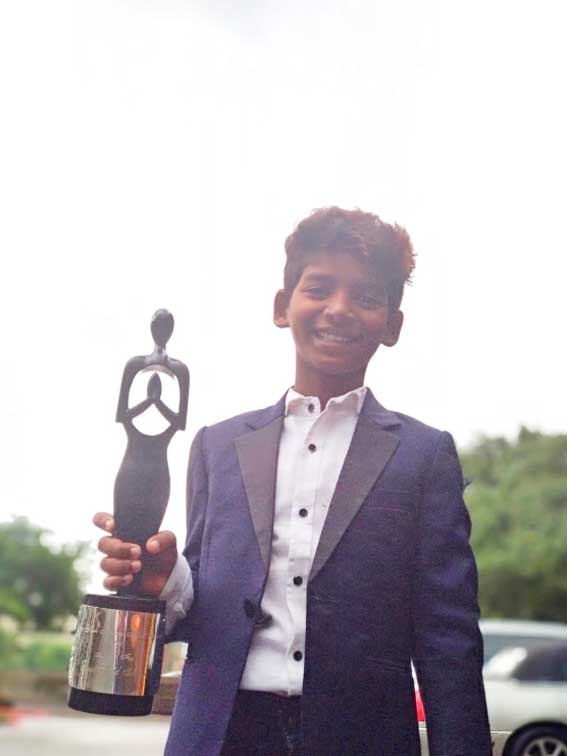