The renowned director of Hindi as well as Marathi films Shrabani Deodhar is staging a grand come back with the Marathi film Mogra Phulala starring Swapnil Joshi and her own daughter actress Sai Deodhar Anand in the lead roles with a power packed performer like Neena Kulkarni. In this freewheeling interview, SHRABANI DEODHAR tells JYOTHI VENKATESH that directing a Marathi film like Mogra Phulala now is akin to coming home for her.

In the first place, why did you stop directing films after making epoch making films like Sarkarnama and Lapandav?

I stopped directing films on a sad emotional note after I lost my cameraman husband Debu Deodhar. After his death, I took up work with a television channel for almost nine years but then sometime back when I sat down and introspected, I realized that Debu may not like it if I just gave up filmmaking. I waited for the time when I can make a film the way I wanted to make it.

The opportunity came in the form of my good friends Arjun and Kartik, who along with Swapnil encouraged me to make a film the way I wanted and now after launching our film on February 15, we are ready with Mogra Phulala in less than four months since we had launched the film. It is a film which has been made with a lot of passion by each and every department connected with the film

Mogra Phulala is a feel good love story with relationship as the backdrop. It has several layers. Sachin Mote and I have crafted this emotional film which deals witrh a mother and her son, played by Neena Kulkarni and Swapnil Joshi.

Is it true that you have cast Neena Kulkarni in a never seen before role of her career?

Neena is a versatile actress who has played very possible role earlier in her chequered career/ I have cast her as a mother with grey shades actor the first time. All of us have our own plus points as well as flaws in us. Not every mother need be a virtuous mother, you see.

What is the plot of Mogra Phulala?

The film is about the fact that we do not at all realize that life is very complicated but live every day in our lives by experiencing then symphony around in our own way.

How difficult was it for you to make a film like Mogra Phulala?

Frankly, it was very difficult not to feel insecure and change my conviction. I had to be abridged with the latest technique as it has changed a lot over the years. If only my conviction had collapsed, the film would have taken a different turn and hence I had to have a lot of implicit faith in myself and my ability to make the film.

You have cast actors like Swapnil Joshi, Neena Kulkarni, Chandrakant Kulkarni and your daughter Sai Deodhar Anand who is making her debut in films after working on TV. How tough was it for you to cast the actors?

It was not at all tough to cast but to think of which actor to cast in which part. Believe it or not, there are as many as 32 actors in my film. It was not tough but difficult to choose the right actor for the right part in the film. And I should say that half the battle was won when every actor said yes to the subject after the first narration itself, including Swapnil Joshi.

How did you think of casting Sai?

I had been toying with the ideas of making a film with Sai in Marathi for a long time but I was not getting the suitable script to launch her. After hearing the script, Swapnil had confidence in Sai as an actress. Swapnil asked me to go ahead with Sai opposite him He was of great help to me and a great partner as far as making the film was concerned.

How do you feel when you look back at your growth as a director over the years?

The technician in me is very happy with my growth as a director. I’d say that different films have enriched me in different ways. I have directed Silsila Pyar Ka with Karisma Kapoor, Pehchaan with Shilpa Shetty and a film called Ghar Onda for Colors.

After making films in Marathi like Lapandav and Sarkarnama, you are now making a film in Marathi after a gap of nine years. How has the experience been?

Making a film in Marathi which is my own mother tongue is like coming home because there is more purity especially since you are not bogged down by external pressures. When I set out to make my films in Hindi earlier, I had to succumb to several pressures though now I believe it is smoother to make Hindi films too. 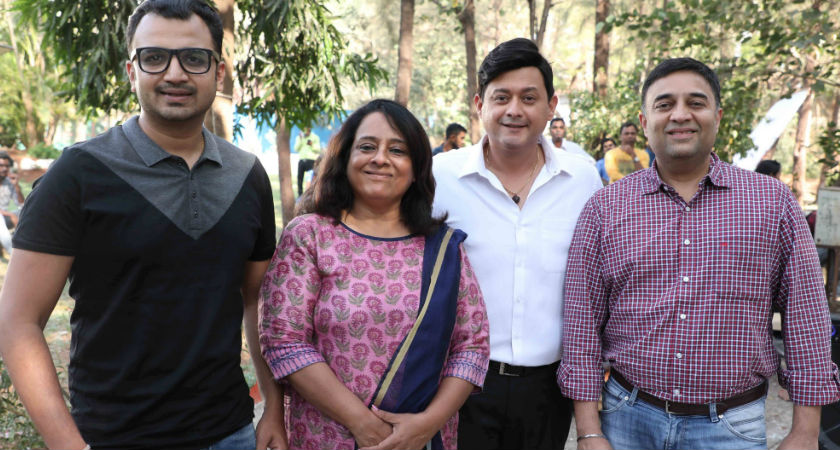 How do you rate Marathi Cinema today?

I have always liked V. Shantaram Bapu’s Marathi films. I have watched his Kunku and Manoos. I have also watched Dattaji’s films. In recent times, I liked Fandry and Muramba

Do you think Marathi Cinema has changed for the better?

I’d say that Marathi Cinema has changed for the better as well as for the worst. Though now we are technically better equipped than earlier, it is sad that we are aping Hindi Cinema and losing on our own Marathi ethos, what with every other Marathi film resembling a Hindi film these days.

You have also turned a producer with the film The Sholay Girl for Zee 5.

Yes. It was a wonderful experience for me to make The Sholay Girl for Zee5 under our banner Purple Movies which I have started with my daughter Sai. As a producer and also screenplay writer, the film The Sholay Girl which was directed by Aditya Sarpotdar who had done a very wonderful job, fetched for me a lot of adulation. I am planning to make my next film in Hindi under my own banner

I Relate To My Character In A Lot Of Ways: Ishaan Singh Manhas