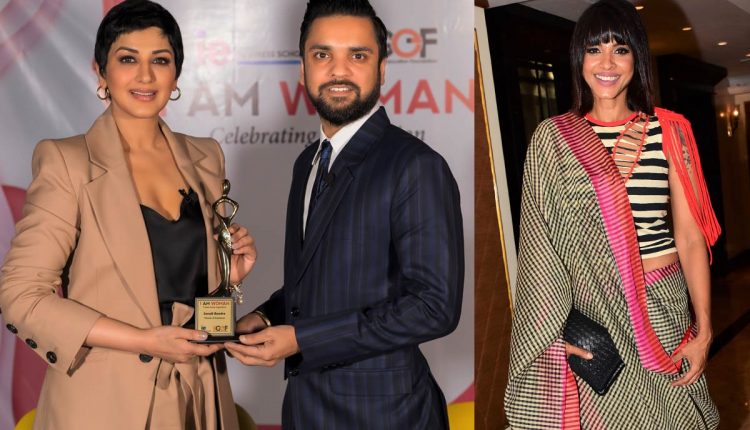 My Mother Always Said Unless You Are Independently Earning, Do Not Get Married- Sonali Bendre

The ‘I am Woman’ Awards, an initiative that celebrates the inspiration of women was created by Harvard & IE Alumnus Dr. Karan Gupta and IE Business School four years ago. This award is a movement that believes the fact that women are reservoirs of strength. On this platform every year, powerful women speak about their personal and professional lives, thereby inspiring many others.

This discussions this year ranged from empowering women in business to how women can create positive impact in their respective communities.

Empowering women, actor Sonali Bendre who was undergoing treatment for a high-grade cancer in New York and is back to work after a long hiatus, stated, “My mother always said unless you are independently earning, do not get married. If you are not economically independent, you can never really stand up for yourself. Then it’s up to you, if you want to give it up tomorrow. That’s different. That’s a choice you make. But you have to start out with being economically independent. Given that, there is always a kind of equality in your relationship.” She further added, “I always love awards, as well as the rewards but awards are always special. And I think that the Karan Gupta Education Foundation is doing a lot of good work and this award means more specially because there is so much of good work going into it,” enthused Sonali Bendre.

The other awardees of this year also shared their honour and delight at receiving the award this year. In 2018, the I Am Woman Award was given to Sushmita Sen, Tata Group Industrialist Leah Tata, Actress & RJ Malishka Mendonsa, Activists Jyoti Dhawale and Preethi Srinivasan, Advocate Abha Singh, Artist and Philanthropist Michelle Poonawalla, International Designer Falguni Shane Peacock, and Entrepreneur Bhavna Jasra; in 2017, the I Am Woman Award was given to Amruta Fadnavis, Laxmi Agarwal, Gauri Sawant, Farah Khan Ali, Malini Agarwal, Shaheen Mistry, and Krishika Lulla while in In 2016, the award was given to Sonam Kapoor, Reshma Merchant, Maheka Mirpuri, Raunaq Roy, Kiran Bawa, Nisha Jamvwal, Devita Saraf, Amrita Raichand, Rouble Nagi and Lucky Morani.

Expressed Dr. Karan Gupta, ““IE Business School and KGEF actively support and encourage women in business and have special scholarships for women. We recognize the challenges that women in business face and wish to support them in every way that we possibly can.”

Winding up, one cannot help but think of to a song that dates back to the 70’s… ‘I am a Woman… Hear me roar, In numbers too big to ignore. If I have to, I can do anything. I am strong, I am invincible, I am a Woman.’

“I Don’t Think I Fit In There, Either By Way Of Looks Or Acting Style” Mohanlal