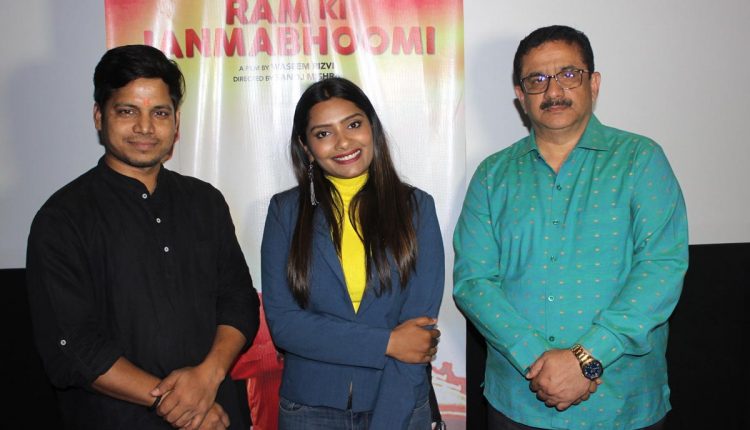 A week before the release of the film of writer and producer Waseem Rizvi, based on the construction of Ram Mandir in Ayodhya, is facing opposition from many religious organisations. The All India Ulama Board’s Madhya Pradesh unit has protested against the actress of the film Ram ki Janmabhoomi Najneen Patni and film. They have issued fatwa and demanded a ban on the film’s release.The film writer-producer Waseem Rizvi and actress Najneen Patni addressed the media in Mumbai regarding fatwa. Najneen Patni said that when my family members saw the news of fatwa against me on news they got worried but I explained them about my role and the thought process of the film. There is nothing in the movie that I should apologize for. I am proud of the film Ram ki Janambhoomi, because in it we raise a voice against social evil like Halala.The religious organization have  opposed the film and asked me to apologize for this film. But I want to tell them that today my family is with me. I am not afraid of any fatwa and opposition.Under the banner of Cinekraft productions, directed by Sanoj Mishra ,the film Ram Janambhoomi depicts the major incidents happened at the birthplace of Lord Ram since 1992.The most notable thing is that Waseem Rizvi has himself written the film and most of the scene of the film has been shot at Ayodhya.Noteworthy, that All India Ulama Board, Madhya Pradesh President Qazi Anas Ali Nadvi has said that Shia Waqf Board, Uttar Pradesh’s President, Waseem Rizvi’s film “Ram ki Janambhoomi” is not only disputed but it is going to create hatred among the two communities. An attempt has been made to dispute the two important and sensitive issues of the film. It has been told in the film that father-in –law had done Halala with his daughter-in-law, which is completely wrong. There is no such example in the world, it is clear from the fact that they have presented Halala very wrongly, which has hurt the feelings of the Muslim community against Shariyaat and Islam. The board will not tolerate any mess with Shariyaat. We request the central government to ban the release of this film.

Manoj Joshi, Govind Namdev, Najneen Patni, Rajveer Singh, Trisha Sachdeva and Aditya will be seen in important characters. The movie has been shot in many important parts of Ayodhya under the direction of director Sanoj Mishra, who has been in the limelight from the film Gandhigiri. The cinematographer of the film is Sandeep Tyagi and executive director is Vivek Agrawal. After receiving the clearance from censor board and high court, the film will be screened on 29th March, 2019.The film writer and producer Waseem Rizvi believes that the film will hit hard on the politician who ignite such issue in the name of religion. The film also presents the painful evil mischief like Halala of the Muslim community in front of the audience. This film questions on the why the issue of ram mandir still existing? How long does mental torture from Halala practice in the modern society? How horrible will be the end of this multi-physical relationship with their daughter-in-law under the Halala?If the question is flawless, the answers will also be vivid, we are showing everything in the film which should not exist in a decent Muslim society. I know that this movie is very prick for the ones who does harsh politics under the name of religion and Babari Masjid. But we have to come together together to build a temple on the birthplace of lord Ram in the country and to eradicate the shameful evil like Halala from society as soon as possible.