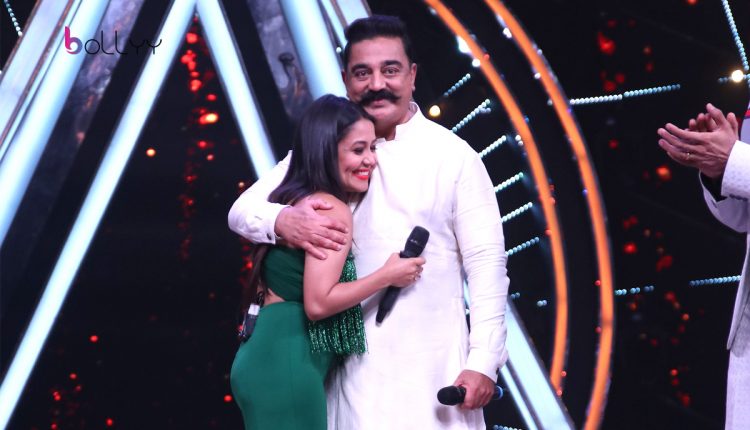 India’s biggest singing reality show Indian Idol 10 is creating waves amongst the audiences with spell binding performances from its top 14 contestants. The show is all set to entertain viewers with an amazing line up of songs over the weekend. Legendary actor Kamal Haasan will also grace the stage. He will wow the viewers in the special ‘Thank You’ episode which features the contestants and the superstar thanking the important people in their lives because of whom they have achieved success and reached such an important stage in their life. The star who is soon to release his mega movie – Vishwaroopam 2 was delighted to be on the show. The uber talented actor turned nostalgic as the singers belted out tunes from his yesteryear movies such as Ek Duje Ke liye, Saagar etc.

The mere presence of a superstar like Kamal Haasan can make any contestant conscious before their performance. Interestingly, our very own judge Neha Kakkar had a fan moment on the sets and was in total awe of the “Hindustani” hero. When Neelanajana Ray stepped up and delivered a fantastic performance with her rendition of ‘Tere Mere Beech Mein’ from Kamal ji’s landmark movie – Ek Duje Ke Liye, Kamal Haasan was all praises for her. The ever smiling actor congratulated Neelanjana on singing such a difficult song with finesse, a song from an era when she wasn’t even born! He also added that he envies Neelanjana for the singing talent that she possesses and even joyfully joined in the performance with a short Tamil dialogue. Witnessing this, Neha Kakkar too expressed her wish to relive the same moment with Kamal ji. When the Southern Super-star repeated his dialogue, Neha Kakkar could only giggle like a nervous teenager before completing her bit of the dialogue!

Neha Kakkar said, “It was such an amazing moment to have a living legend like Kamal Haasan ji on our show. His mere presence is so inspiring. I am blessed that I got the opportunity to share a stage with him and we also sang a duet together – Jitne Bhi Tu Kar Le Sitam’. Kamal ji is a powerhouse of talent! And the way he spoke to everyone was truly remarkable. He even boosted the confidence of all the contestants on stage. I have never till date learnt so many valuable lessons from an individual in a single day. It was an honor to have him on Indian Idol 10.”

“We are the Amar ( Deepika), Akbar(SRK), Anthony (John) of cinema, with no culture…

Press Conference Regarding Success of Movie ‘Pathaan’ in Mumbai

Zee Café is all set to telecast the Legal Thriller, Damages for the viewers