Looks like there are a lot of surprises in the Bollywood industry to offer this year!

We can never forget the blockbuster movie 3 Idiots and the impact it created. It’s been 9 years since the movie got released and still the character of Raju, Farhan and Rancho seems to be fresh in our mind. 3 Idiots was the movie which every youth related to their own life pretty well.

And now after the announcement of the third installment of the Munna Bhai series, Rajkumar Hirani just confirmed the rumours that he is working on the sequel of 3 Idiots that will feature R Madhavan, Sharman Joshi and Kareena Kapoor Khan in the film. 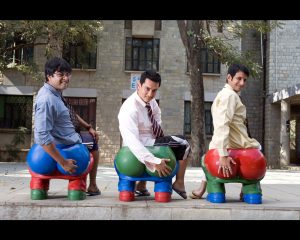 Talking to a leading daily, the director said, “I definitely want to make a sequel to 3 Idiots. In fact, Abhijat [Joshi, writer] and I started writing something a few days ago. But it’s still in the initial stage and we will take a fair amount of time to develop the script.”

Even Aamir Khan had earlier expressed his interest in taking the story of the three friends forward.

Right now Rajkumar Hirani’s upcoming biopic Sanju is the most awaited movie of the year which will release on 29th June 2018. Apart from that, the director will work on the third part of the Munna Bhai series.