At a time when there is so much of fear , frustration and a feeling of gloom in the industry , like it is all over the world , it was not only a pleasure but also enlightening to listen to Pahlaj Nihalani ( who doesn’t know him ? )seeing so much hope for the industry – Ali Peter John

The man who has been a leading producer who has made twenty five films , distributed countless films , who has been the President of the Association for Film And TV Producers for a record number of twenty nine years and who has been the Chairperson of the Central Board for Film Certification , besides holding other responsible posts which matter to the functioning of the industry.

He talked about every known and unknown problem that has been threatening the industry .

In which he is passionately interested because he had been madly in love with films since he was nine and a half years old .

He has just completed the shooting of his twenty sixth film at a time when the industry is finding it very difficult to know which way it is going and what the future holds for it .

He had completed the shooting in just two months and is now planning ways to carry out a publicity campaign and more importantly ways of releasing the film.

He for reasons best known to him doesn’t want to reveal any details about the film except for the name of the leading lady who he had discovered when he made his last film “Rangeela Raja” with Govinda as the leading man ( he had made seven films with Govinda ) .

The actress who has been lucky to be found by Pahlaj is Mishika Chourasia who was in the lead role in” Rangeela Raja ” .

She impressed the veteran filmmaker so much that he decided to have a contract with her to do three films with her , which means that she has one more film to do with Pahlaj.

Pahlaj who has been making films for more then three decades has seen the ups and downs and the changing faces of the industry , but he has always been a die hard optimist who has walked through fire and come out a winner each time and now during these Covid times, he is still optimistic about the darkness being whiped out and the light of hope being brought in .

And Pahalaj is not just being poetic or philosophic, he has a number of practical solutions to the problems the industry has been viciously wrapped in .

Pahlaj who has been instrumental in solving intricate problems about the multiplexes and the ways they released films , he was also the mind behind the growth of satellite and there have been many other such problems of producers he has eased while he was the President of the Association .

He is one of those men who believed that nothing is impossible once it is decided that the impossible has to be made possible , come what may .

One of the primary and priority need of the time according to Pahalaj is to have very good content which is according to him the solution for film industries anywhere in the world .

He cites a number of examples about how good content has won the game for producers and in these days of the OTT platforms too , Web films like “Ashram” ,” Patal Lok” and” Sacred Games ” have been big hits mainly because of the content they provided .

Pahlaj believes that even the star system and the prices of the stars are turning out to be a hindrance to making films and therefore attempts have to be made to cast as many newcomers as possible ( he personally has decided that he would now make his films only with newcomers ) .

He provides examples to prove how the early films of Rajshri and directors like Satyen Boss, Mohan Segal and filmmakers from different languages made their films with new faces and yet made successful films .

” Then , why can’t we make films with the hundreds of newcomers who are waiting for that one break that can change their lives ?

” Pahlaj says in a spirited talk which went on for almost two hours . Pahlaj has also given breaks to newcomers like Govinda , Suneil Shetty , Chunky Panday , Divya Bharti Neelam and others who went on to be leading stars .

He has also worked with new directors , new writters and technicians. He feels that it is easier to get good work out of enthusiastic and excited newcomers than the established stars who have lost the fire in them. 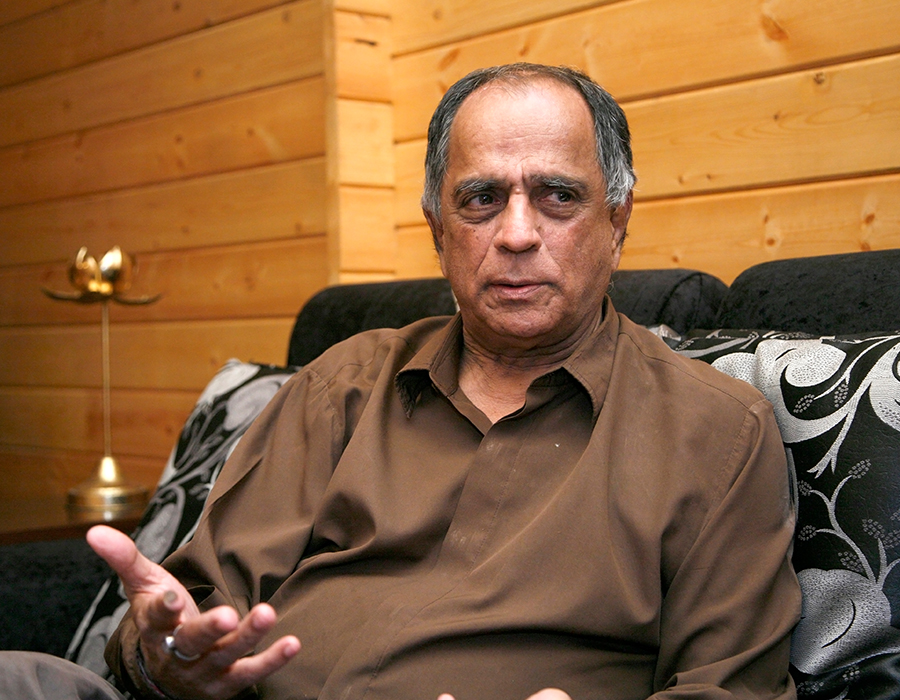 Pahlaj must be one producer who has worked with the maximum number of stars , but he says that he had a very warm relationship and a great deal of understanding and a personal relationship with almost all of them , from Sanjeev Kumar and Shatrughan Sinha to Govinda, Suniel , Chunky , Divya Bharti and even all the senior actors which made working for all of them easy and better .

And the biggest problem according to Pahlaj is getting theatres , single screens or multiplexes .

He says that there is a kind of thinking among the exhibitors to differentiate between small films and big films .

It is only a man who has the good of the entire industry who can think of an idea to have regular shows of unreleased films on Television .

He is of the firm belief that these shows which can be held like they used to be had by exhibiters in single screen theatres and they would not only get the audience in , but also across advertisers .

According to Pahlaj, ” no one has even imagined that we could have such shows on T V ,but I feel strongly that this experiment must be tried and I am sure it will succeed”.

Pahlaj is a creation of films . He has spent his life dreaming of and making films , ” because I cannot do anything else “.

His wife Neeta and his three sons Chirag , Vishal and Dipesh are his pillars of support and are involved in the business of films too, and so is one of his daughters in law and in spite of all the hurly burly of the work the family is involved with , they are a very close – knit family and are there for each other whenever there is a need.

Pahlaj is acutely aware of the changes that have taken place in the industry but he believes in change if it is better , but not changed for the sake of change.

And Pahlaj is proud of his vision (let me call it “the Pahlaj Nihalani vision”). He says he has a vision for the industry to which he has given more than five decades.

He has a vision for every film he makes and will make in the future. And he is emphatic that he also had a vision when he was the Chairman of the C B F C, for which he was cruelly criticized by the industry, by the media and even by his own people and those who were responsible for raising him to a status like the post he held .

He says that there were people who criticized his decisions, but he says , ” “now there are more shocking decisions taken and no one is willing to criticize them .

I have known Pahlaj ever since he made his first film ,”Hatkadhi” and I still remember that outdoor shooting in Goa where we had more of fun than work even though the schedule with the entire unit was crucial to the making of the film .

I remember how I had missed my flight to Bombay from the Dabolin Airport and when I called him to tell him about my stupidity , he just said “check in at the five star hotel near the airport and take the flight tomorrow afternoon.

What are friends for ?” And since that afternoon we have been friends. And when I talked to him this afternoon after more then five years ( thanks to Mr P K Bajaj of Mayapuri ) it seemed like nothing had changed in us as friends.

And I remembered that line he spoke thirty five years ago at the Debolin Airport, ” WHAT ARE FRIENDS FOR ? ”