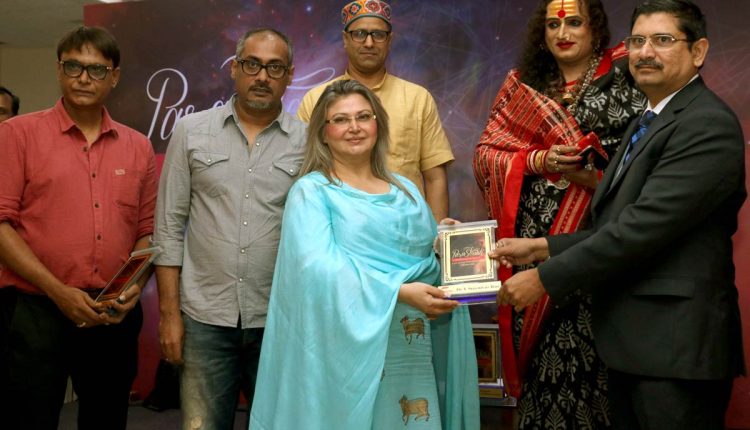 Parashakti is an initiative launched by prominent social activist Mrs Reshma H Singh, to bring the change we all seek in lives of women, particularly in the vulnerable segment of Film and TV industry.

Chief Guest at the event, Indresh Kumar Ji, Nationalist Leader, said – “Drugs break the body but we also need to address the drug of casteism and objectification of women which intoxicates the mind. “ In his fiery speech, he urged not just women, but all men to come together and fight injustice and gross exploitation meted out to women. “

Speaking at the event Mrs Reshma H Singh said, “If you are a woman in some pain, if you have been victimized, if you feel weak and abandoned or discriminated– then Parashakti is going to be that platform where your voices will be heard, justice would be done and your dignity restored. “
Encouraging the women to take a firm stand she said, “All form of injustice must first be confronted by you – your own self, because you have that power inside you, whether you know it or not. All form of life energy and creation flow through a woman. You are that Shakti that fills this universe. “

The key highlight of the event was a presentation on Mission Shakti, India’s A-SAT program, by Project Director and distinguished scientist from DRDO, Dr. Y Srinivas Rao. He highlighted the urgency for guarding the boundaries and space and demonstrating our capabilities to the world. He said we have always been a scientific civilization and today we are again on the path to regaining that place in the world. Mission Shakti is only the beginning. It is like the awakened female spirit of INDIA.

Acharya Mahamandaleshwar Dr. Laxmi Narayan Tripathi, in addition to being a spiritual leader has been a prominent voice for the LGBTQ community and their rights. She said the journey up till now has been tough and hard fought, so I whole heartedly welcome Parashakti as a unique platform to empower those who we perceive to be weak and marginalized and those who have remained claustrophobic in dark shadows cast upon them by the society.

Prof Rakesh Upadhyay, guest speaker, said inspiration for Parashakti has come from Mission Shakti that was not just aimed at testing our capabilities to bring down anything that intrudes our space but also a subtle warning to those who might even consider doing that. If we can destroy a possible threat 300 km away, we can surely deal with anything closer.

The key take away from the concept of Parashakti was that a woman must fight when she must fight. The knowledge that we have the power inside us to retaliate is quite comforting. Defining spaces and maintaining boundaries has always been an issue with women. It has become easy for predators to cross the boundaries because these boundaries have not been firmly defined and our reactions are more of self-pity and frustration than of retaliation and that of a warrior.

In a jam-packed auditorium, noted writer-director Abhinav Singh Kashyap moderated the event and took questions from the guests that included models, actors, technicians from the Film and TV industry. He highlighted the rampant increase in toxic masculinity amongst the men, particularly in the industry.

Concluding the event Mrs Reshma H Singh said that the film and television industry is full of artists, technicians and performers with tender hearts and vulnerable souls. The heart that creates art becomes even easier to be crushed. But it is because we let that happen. The real power lies with in us and we can become stronger by coming together- by holding each other’s hand, by sharing our experiences and strengthening each other.

Most of us don’t even know if we can fight …or we must fight. The truth is there comes a time in everyone’s life when they must learn how to fight-.for the dignity, respect, opportunities or recognition that we deserve.

We need to identify the contours of the physical and psychological space that gets tested if not transgressed when it comes to women. The nagging feeling of what could happen is itself a burden we as a society need to rid our women of. And it’s also up to the fathers to give their daughters the confidence to stand up for themselves!

Dr. Y Srinivas Rao and Dr. Laxmi Narayan Tripathi felicitated eminent photographer and social activist Pravin Talan at the event on behalf of Nav Bharat Foundation, and for was his exceptional work on National Security and Women Empowerment over the years.

Nitin Chandra Gets Candid About Promoting Local Regions Through Films