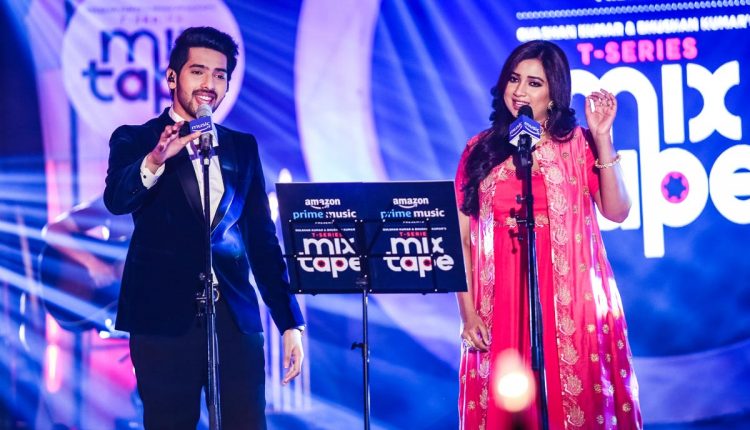 After a successful first season, T-series MixTape Season 2, presented by Amazon Prime Music is back to treat your ears. The first video song from the seasonfeaturing Shreya Ghoshal and Armaan Malik releases today on T-Series Youtube Channel after the audio was exclusively released on Amazon Prime Music on 18thMarch.   Produced by Bhushan Kumar, the season kick-starts with two power packed singers, Shreya Ghoshal and Armaan Malik, recreating the song ‘Tum Hi Ho’ from the movie Aashiqui 2 and ‘Rehnuma’ from Rocky Handsome.

Coming together for the first time ever, Shreya Ghoshal and Armaan Malik are sure to create magic. Music lovers will get to witness Armaan Malik take the soulful version of the much loved song ‘Tum Hi Ho’ and turn it into a peppy number worth shaking a leg to. The lovely Shreya Ghoshal will also be seen adding her special touch to the song as she effortlessly merges it into ‘Rehnuma’ which was originally sung by her in the movie too.

Talking about her performance, Shreya Ghoshal shares, “When we started ideating the songs for this episode, it was a natural progression into the interpretation of Tum Hi Ho. The groove, composition and the kind of swing the song has, is a sort of an interpretation which people haven’t heard before. When Music Director Abhijit Vaghani and myself were going through the list of artists and Armaan Malik’s name popped up, it was an instant yes because – ‘he’s a talent to watch out for’!”

Commenting on the same, Armaan Malik says, “Tum Hi Ho, is an evergreen song. This version will see a completely different take on the song. Moreover, I am extremely excited about singing and sharing the stage with Shreya Ghoshal because it’s always been a dream to sing with her and this is the first time we are coming together. This is going to a memorable performance of mine.”

Music Director for the show, Abhijit Vaghani further adds,“This is going to be one spectacular episode. We have changed the arrangement and tempo of the song from a sad slow version to a funky one using brass and strings. We are sure people will love it”.

Catch the first episode today in Shreya’s and Armaan’s voice only on T-Series Youtube Channel, directed by Ahmed Khan and conceptualized and developed by Shivam Chanana and Sonal Chawla. Also, listen to the song on Amazon Prime Music ad free for a voice enabled listening experience.

“I Am Not Playing A Tulsi Or Parvati On The Show,” Says Shrenu Parikh