Diljit Dosanjh’s much-awaited period film Sajjan SinghRangroot is out now. The poster is powerful enough to blow away your mind. The movie is directed by Pankaj Batra, who has directed movies like Goreyan Nu Dufa Karo and Bambukat, and the movie is set during the British rule in India and is the fictional version of the times when Indian soldiers were sent off to fight German during World War I.

Versatile actor-singer Diljit while talking about his dream project said, “I feel blessed to be a part of this prestigious project. It is indeed my dream project and is closest to my heart.”

The film is written by Gurpreet Singh Palhadi and shows the hardships faced by the Indian army during World War I and how the soldiers tackle every difficult situation under the guidance of Subedar Zorawar Singh. The movie also shows the time when the British army honored the contribution made y Sikh soldiers during World War I. This movie is a sort of tribute to thousands of Sikhs from Indian sub-continent who fought and died for Britain during the war.

While talking about the movie, director Pankaj Batra said, “For the first time in Punjabi film industry a movie is being made on this subject.  A lot of Sikh soldiers sacrificed their lives in World War I and this is our tribute to them. It’s a matter of pride and honor for me to be directing such a film. Diljit has lived this dream and put his heart and soul into this character. Since it’s a unique subject we are sure the audience will like it.”

The movie also marks the debut of renowned Punjabi singer Sunanda Sharma and is slated to release on March 23, 2018.

Here is the First Poster of Sajjan Singh Rangroot; 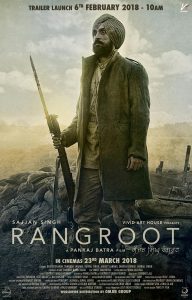 12 FACTS ABOUT DEEPIKA PADUKONE WE BET YOU DID NOT KNOW