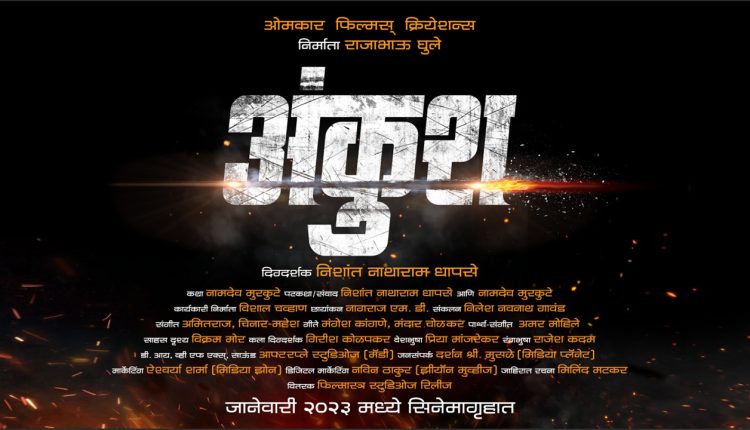 By Team Bollyy Last updated Oct 6, 2022
21
Share
Sri Rajabhau Ghule has made a powerful debut in Marathi cinema with his very first production. Through his Omkar Films creation, he has produced the big budget movie “Ankush” with a strong Marathi star cast and technicians. He intends to take his debut film to a bigger level. In January 2023, the movie “Ankush” will be released everywhere. The poster of this film was launched on the auspicious occasion of Dussehra.
He aims to produce different interesting films in Marathi cinema without making only one film. The film “Ankush” will be seen for the first time in Marathi with great adventure sequences directed by National Award winner and KGF action director Vikram More. Legendary Marathi music composers Amitraj and Chinar- Mahesh are composing the music for this movie, Hindi Marathi cinema’s famous music director Amar Mohile has composed background music for this movie. Beautiful lyrics are written by Mangesh Kangane and Mandar Cholkar. Cinematography by Nagraj Diwakar and multi-award winning editor Nilesh Gawand has handled the compilation of the film. Famous art director Girish Kolpakar, while Vishal Chavan’s first work as an executive producer. The story of the film is written by Namdev Murkute, screenplay and dialogues by Nishant Natharam Dhapse and Namdev Murkute, while the writer and director of national and international award-winning films Nishant Natharam Dhapse is making his directorial debut with this film.
Producer Rajabhau Ghule and director Nishant Natharam Dhapse said that the cast of the film will also be announced in the next few days.
Post Views: 161
Ankushbig budget filmRajabhau Ghule
21
Share

From Reel to Real – Just Neel Things aka Neel Salekar gets Ranveer Singh grooving on his creator anthem Jinklo at the Meta Creator Day!