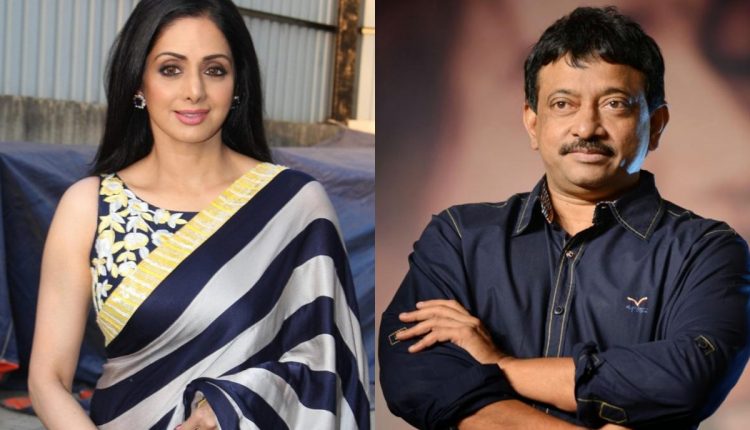 RAM GOPAL VARMA TO DIRECT A BIOPIC ON ‘SRIDEVI’?

We have seen all the love and tribute given by Sridevi’s fan till now and not just the fan, Sridevi was also admired by many of the Celebrities. Sridevi’s untimely and sudden demise left the whole world in shock. People were expressing their condolence and sending prayers for Sridevi by tweeting their post on Twitter. Director Ram Gopal Varma and Sridevi worked together in many movies like Great Robbery, Govinda Govinda, Hairaan, Kshana Kshanam. He is also among one of the admirer of Sridevi and was seen very upset with her death news.

As per the latest reports, Ram Gopal Varma, who recently made the headlines for his controversial film Sex, God and Truth is now planning to make a film on Sridevi’s life. The director has not yet officially announced the news, but lyricist Sirasri who is a follower of Varma told a Telugu TV channel that Varma will officially announce the biopic once the story is locked.

Few days back, Ram Gopal Varma had written an open letter to Sridevi’s fans too. He wrote, “I know her life from the time I met her. I saw with my own eyes how her life was like a bird in the sky till her father’s death and then became like a bird in a cage due to her overprotective mother. In those days actors used to be only paid in mostly black money and due to fear of tax raids her father used to trust friends and relatives and everyone of them betrayed her the moment her father died. Coupled with this the ignorant mother made many wrong investments in litigated properties and all those mistakes combined made her almost penny less by the time Boney came into her life.”

She’s Gone out of our World …What Will Remain Is What She Contributed To our World ..RIP Sridevi 🙏🙏🙏

A Fact From The Future

I care a damn about which demon was killed in the past for us to celebrate HOLI ..since I am grieving for the way God Killed SRIDEVI ,I wish everyone a very UNHAPPY HOLI #UnHappyHoli

The legendary Bollywood actress passed away in Dubai on 24th February 2018, after accidental drowning in hotel bathtub.

#FITNESSGOALS: 5 TV CELEBRITIES YOU SHOULD FOLLOW FOR FITNESS MOTIVATION