Kareena Kapoor Khan and Saif Ali Khan’s little boy Taimur Ali Khan is media’s favorite baby. He is an eye-candy on social media. Taimur’s pictures, outings, gym sessions everything goes viral on social media within few minutes, even when his parents are not on social media.

Not just media, but also his uncle Ranbir Kapoor is a big fan of Taimur. While interacting with Rajeev Masand, Ranbir Kapoor admits stalking Taimur’s photographs on social media.

Ranbir said; “To be honest, I stalk his pictures because I’m also obsessed. When you see him, it just warms your heart… I’m a Taimur fan. I have had the opportunity and the good fortune to hold him, and it was quite surreal. It felt like, you know, holding royalty.” 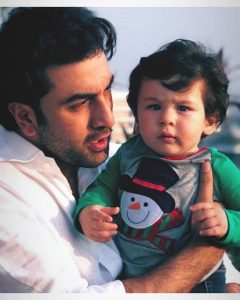 When Ranbir was asked about paparazzi culture during his childhood, he said;  “Of course, camera phones weren’t there, and the paparazzi weren’t there, but we got our own kind of attention.”

On the work front, Ranbir Kapoor will be next seen in Sanjay Dutt‘s biopic Sanju, slated to release on June 29.

RANBIR KAPOOR TALKS ABOUT HIS RELATIONSHIP WITH ALIA BHATT

ANURAG, KARAN, DIBAKAR AND ZOYA’S LATEST ANTHOLOGY ‘LUST STORIES’ IS OUT ON NETFLIX!

Don’t know if becoming an actor is the best decision, but I always followed my heart…

I like the fact that Shobit’s character is so layered, and how they unfold…