Former Miss Asia Pacific, Dia Mirza is the UN Environment Goodwill Ambassador of India. The actor has often voiced her concern over plastic pollution in the country. Yesterday, along with actor Ranbir Kapoor, Shahid Kapoor, Kartik Aaryan and filmmaker Karan Johar, Dia was also present at the IIFA press conference in Delhi, where she took her campaign ‘Beat Plastic Pollution’ a step further. 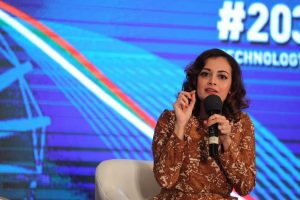 Dia, who is working for this great cause also found support from her friends in the film industry as Ranbir Kapoor, Shahid Kapoor, Kartik Aaryan and Karan Johar also joined hands with the actor to fight against the plastic pollution concern in India. 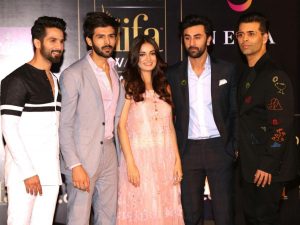 According to a leading daily, Dia said, “With India hosting the World Environment Day on June 5, we are mobilising a movement to beat plastic pollution. We want to create a mindset that outlast the celebrations. Public participation and civil awareness must continue to grow about the single-use plastic pollution.”

“Having celebrities lend their voice to the movement will help us tremendously in expanding the reach of the cause. It will help in influencing and inspiring millions of followers that these stars have. The enthusiasm that Ranbir, Shahid, Kartik and Karan showed in understanding the pertinence of the campaign, is exciting,” she added.

RANBIR KAPOOR HAS A “BOY CRUSH” ON ALIA BHATT

IS SONAM KAPOOR MOVING TO LONDON WITH ANAND AHUJA?