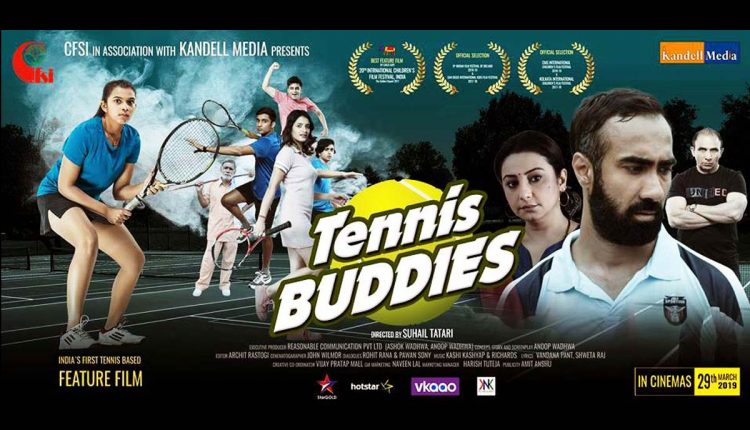 In recent times, Bollywood has seen some very interesting movies on sports. Sarting with the Shah Rukh Khan-starrer Chak De India on hockey, we witnessed Salman Khan and Aamir Khan in Sultan and Dangal focusing on professional wrestling. Akshay Kumar came up with Gold on football, and R.Madhavan with Saala Khadoos on boxing.

We even had biographical films like the Farhan Akhtar-starrer Bhaag Milkha Bhaag on champion runner Milkha Singh, Priyanka Chopra-starrer Mary Kom on boxing, and the Emran Hashmi-starrer Azhar and Sushant Singh Rajput-starrer M.S. Dhoni: The Untold Story on the lives of the great cricket stars.

This week the film industry gears up for another film on sport, but with a difference. Highlighting tennis for the first time in Bollywood, the upcoming release Tennis Buddies, will actually have a real tennis star Dakshata Patel playing the lead. What’s more! The girl is making her Bollywood debut at the young age of 19 along with powerhouse performers Divya Dutta and Ranvir Shorey in pivotal roles.

No wonder that during the promo launch of the film sometime ago, tennis legend Leander Paes turned up in support of Dakshata’s endeavor. “Tennis Buddies has been a big challenge not only because I am young or a tennis player in real life,” quips Dakshata.

“It’s been a revealing journey for me to bring sport and entertainment together,” adds the introspective newcomer. The trailer of the film has her bringing freshness and innocence with versatility in her expressions. She well understands that only sport wouldn’t attract the viewers.

“The film has a lot of human interest angles to make it an entertainer. But most importantly, it showcases a beautiful father-daughter relationship, which all parents and kin would identify with,” she remarks.

Dakshata hopes the audiences would accept Tennis Buddies as it hits the theatres this week. And who knows! If this works, it can even be the start for a fledging career as an actress for her. For now, she has her fingers crossed. Presented by CFSI and Kandell Media, Tennis Buddies is directed by Suhail Tatari

Swapnil Joshi Roped In For A Cameo On Ladies Special

Debutant Karan Kapadia To Have Bollywood’s First Ever ‘Blank’ Poster!