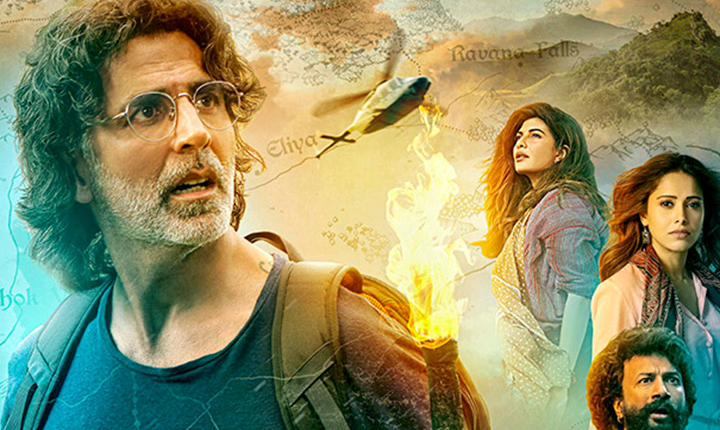 Triumphant tale of the valor of a single man!

The main crux of the story is about a middle aged archaeologist (Akshay Kumar) who sets out to decode the origins of the mythical India-Sri Lanka underwater bridge, believed to be built by Lord Rama. The government, which is hand in gloves with the evil corporate Indrakant, takes the help of the Archaeological Society of India (ASI). Aryan has just been promoted as Joint Director General of the ASI. The government feels an atheist like him can help them and he is asked to submit a report stating that Ram Setu is a naturally made structure and is not man-made.

Though Aryan asks for time to research this, he’s not allowed to do so. Since he is known for his lack of belief in God and religion, he is chosen for a dubious expedition by Indrakant ( Nassar), who wants to destroy Ram Setu for his own commercial gain, especially since he desperately needs evidence that can be proved in the Supreme Court, that the bridge is not man-made (or Ram made). Aryan has to prove that the Ram Setu predates the birth of Lord Ram. As he begins his research, he realizes that he might be wrong in his belief and that Ram Setu was indeed built by Lord Ram and the Vanar Sena. What happens next forms the rest of the film.

Nasser’s character feels and is almost cocksure that if proven that it is man-made, no religious sentiments would be hurt on its destruction. He ropes in atheist Aaryan assuming his verdict would definitely go in his favor, but he is in store for surprise in the long winding climax. The mythical adventure movie is full of characters who locate ancient hidden caves, floating rocks, manuscripts, sanjeevni booti and Ravana’s Lanka. To help Aryan in his mission, hey presto, there is even a helpful guide who totters in the form of Hanuman. De Taali.

Set in a courtroom, the film has Aaryan ranting about ‘pragati but not at the cost of ‘sanskriti’. In its desperate attempt to reframe mythology as history and vice versa, the film, though it manages to keep the audience glued to their seats for sometimes, starts boring them and lull them to slumber by the way the film reaches the interval, since the film suffers from the handicap of not having a cohesive screenplay to pull it through till the end.

Aa performances go to the credit of Akshay Kumar, I should concede that he does put in a performance which is true and honest while Nusratt Bharrucha and Jacqueline Fernandez do serve as nothing more than mere props. Satyadev is a revelation while Pravesh Rana leaves a lot to be desired with his mannerisms and emotionless face. Nasser as businessman Indrakant has been wasted in a role which does not at all offer him scope to display his actual potential

To sum up, Ram Setu is a triumphant tale of the valor of a single man versus the government and I advise you to see it at least once

“Our CineBuster mega-Awards event will be held, at some other location,” assures ‘showman’ Ronnie Rodrigues who hosted Diwali-2022 celebrations – Chaitanya  Padukone