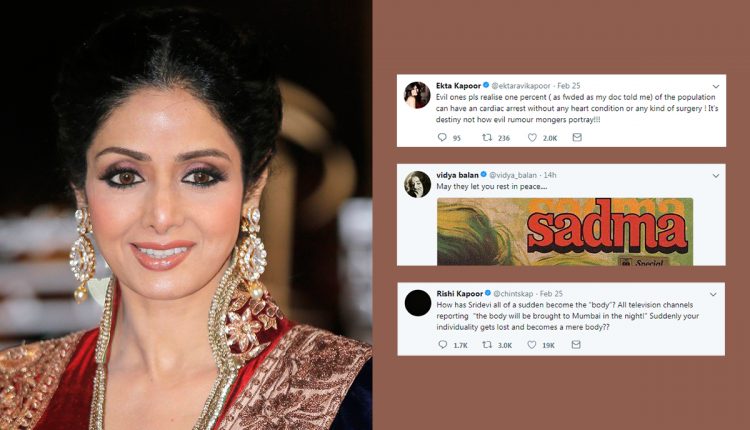 Since Saturday night, the film fraternity, and the nation is in utter shock due to the untimely death of First Female Superstar Sridevi. The rumors were that the actress lost her life due to cardiac arrest, then came the news of Boney Kapoor visiting Sridevi for surprise dinner and then there came speculations of every sort. Indian media, especially news channels did not let the accidental death of Sridevi remain the same. The media crafted news and speculations out of it which pissed off the celebrities and friends of the deceased actress and made them spam the media. Celebrities took to their social media account to debunk Indian media and their cheap tactics to gain TRPs.

Here are the celebrities who took their social media accounts to give a moral lesson to social media;

Do yourselves & your family a favour .. put that TV off,I am amazed that news channels are stooping to this level & ppl think it’s ok to come on a panel & discuss this!there are two very young girls who lost their mom,pls pls stop this

Can any person’s life end in a more tragic and in a more horrific way?
Its traumatic to hear her being dissected in so many terrible ways ? I feel like just fucking kill myself https://t.co/po7Cq5x9Pk

How has Sridevi all of a sudden become the “body”? All television channels reporting “the body will be brought to Mumbai in the night!” Suddenly your individuality gets lost and becomes a mere body??

May they let you rest in peace…. pic.twitter.com/stoWljWkbf

Evil ones pls realise one percent ( as fwded as my doc told me) of the population can have an cardiac arrest without any heart condition or any kind of surgery ! It’s destiny not how evil rumour mongers portray!!!

Atrocious is how #newschannels are sensationalising #srideviji ‘s death. Titles like ‘Chandni ki Safed bidaai’ and ‘aakhri 30mins ka rahasya’. Come on guys grow up. Hate the way even a death is sensationalised. Have some sensitivity please 🙏🏻🙏🏻

News Channels need to be sensible and ethical now. It is important to understand that everything is not meant to be monetized.