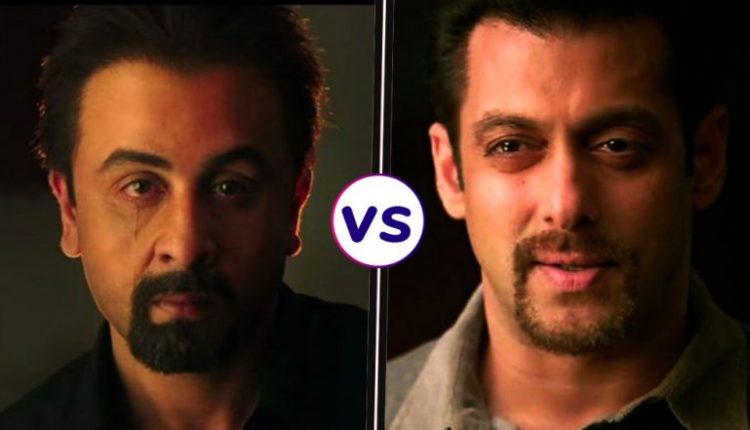 Salman Khan DOES NOT Want to Bump Into Ranbir Kapoor While Promoting Race 3?

Salman Khan does not want to bump into Ranbir Kapoor?

The superstar of Race 3, Salman Khan has been doing quite busy as he is busy promoting his next mega-starrer, Race 3 currently. Race 3 is releasing on 15th of June, 2018 and on the other hand, there is Sanju releasing on 29th of June, 2018 which features Ranbir Kapoor.

The concern here is the competition between lead stars Salman Khan and Ranbir Kapoor. If you aren’t aware why, the reason is simply their ex girlfriend Katrina Kaif. Post the breakup, Salman and Ranbir have been evidently avoiding each other and this avoidance saga continues till date. In fact the superstar bhai is even taken precautions that he doesn’t bump into Mr handsome Kapoor while they are promoting their respective movies.

As reported in Bollywood Hungama, a source revealed, “Salman has Race 3 on June 15 and Ranbir Kapoor’s Sanju is releasing on June 29. Both are promoting their films vigorously. Salman has asked his team to make sure his public events do not clash with Ranbir’s promotional schedule.” Well, we understand that Sallu only wants to avoid the awkward situation and the negative gossips right before the release of his film.

Earlier, when Salman Khan was asked about his reaction on the Sanju trailer, he did not seem much convinced with RK’s performance. During an interaction, bhai said, “Whenever Sanju wants to make a comeback, he will. It is all left to Sanjay Dutt, the day he thinks ‘I want to come back, he will be back.’ Even for the movie Sanju, I thought why did somebody else play his part. No one can do justice to that. The last bit of the film, Sanju only should have played it himself. The last portion of the last eight to ten years, Sanju only should have done it.” Looks like both the stars are in no mood to resolve their issues so Khan’s decision to be at a distance sounds wise. What say?

Sumeet Vyas offers His Piece of Mind To People

Ayushmann flies his trainer to Chandigarh for physical transformation!

Subuhii Joshii Loses Weight All By Herself