Sameer’s Father Showed Him The Way Out, But Sameer Stayed Back To Show The Way To The World….

Sameer Anjaan’s father, Anjaan had to struggle for more than twenty-two years to get his first break as a song writer. He was a well-known poet on the Kavi Sammelan and Mushaira fronts all over the North and had risen to fame when he wrote and recited a parody of Dr Harivanshrai Bachchan classic, ‘Madhushaala’ and which was called ‘Madhubala’ which won him appreciation from lovers of poetry all over, including Dr Bachchan himself….

Anjaan(his pen name, his real name was Laljee Pandey) realised that writing great poetry would not give him a good enough source of livelihood with which he couldn’t keep himself and his family away from hunger and the daily necessities of life. He left the banks of the river Ganga where he was born and brought up and took a train to Bombay with the ambition to make writing lyrics for Hindi films a career…

Little did he know that he would have to face the kind of struggle like no other poet had. He lived according to the pen name he had taken, he was an ‘anjaan'(unknown man) who walked around the roads and lanes of Bombay and when times were better gave tuitions in Hindi to students belonging to the richest families in and around Marine Drive and other posh places and made enough money to live in a pg, have his tea, lunch and a quarter of the bottle of illicit liquor at Pascal’s bar at Khar Danda and then have his dinner at a roadside dhaba and went to sleep to dream of that morning which he hoped would come some day even after so many years (woh subah kabhi toh ayegi). 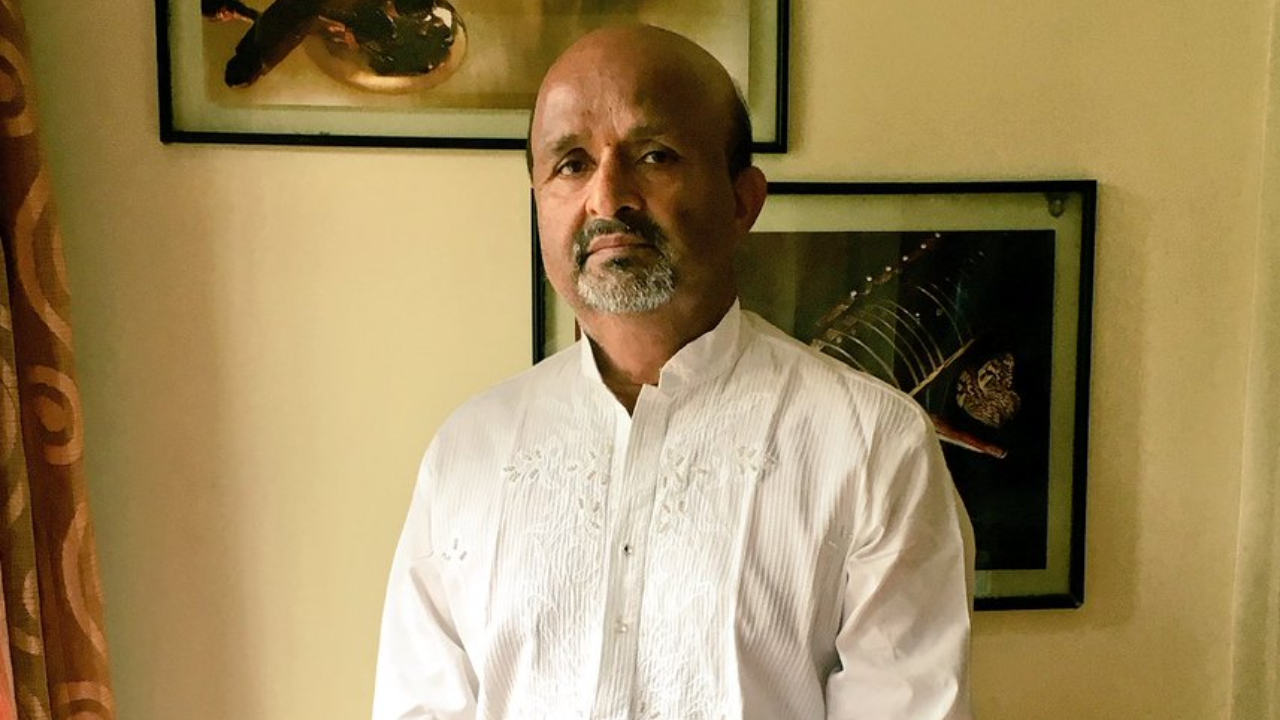 He found a few opportunities to write songs for music directors like G.S Kohli (father of director Kuku Kohli who made Ajay Devgn a star with “Phool Aur Kaante”) and Chitragupta, but they were not the kind of songs that could give him a place in the sun. He had to wait for another unknown (anjaan) actor called Amitabh Bachchan for the times to change for him. It was a coincidence, a quirk of destiny or call it the grace of the almighty that brought these two unknown men together in the seventies when Anjaan was destined to write the songs for most of Prakash Mehra’s films and it had become an unwritten rule that Mehra who was also a poet would write the first few lines of a song in his films and the rest of the song would be written by Anjaan and all the work they did together turned out to be superhits and Anjaan was no longer ‘anjaan’. He was among the top few as a lyricist and wrote the songs for almost every big film, big hero and big banner both in Bombay and in the South. He had now started living with his younger brother, Gopal Pandey who was the leading PR man of the time and they lived a happy life after going through the grand…. 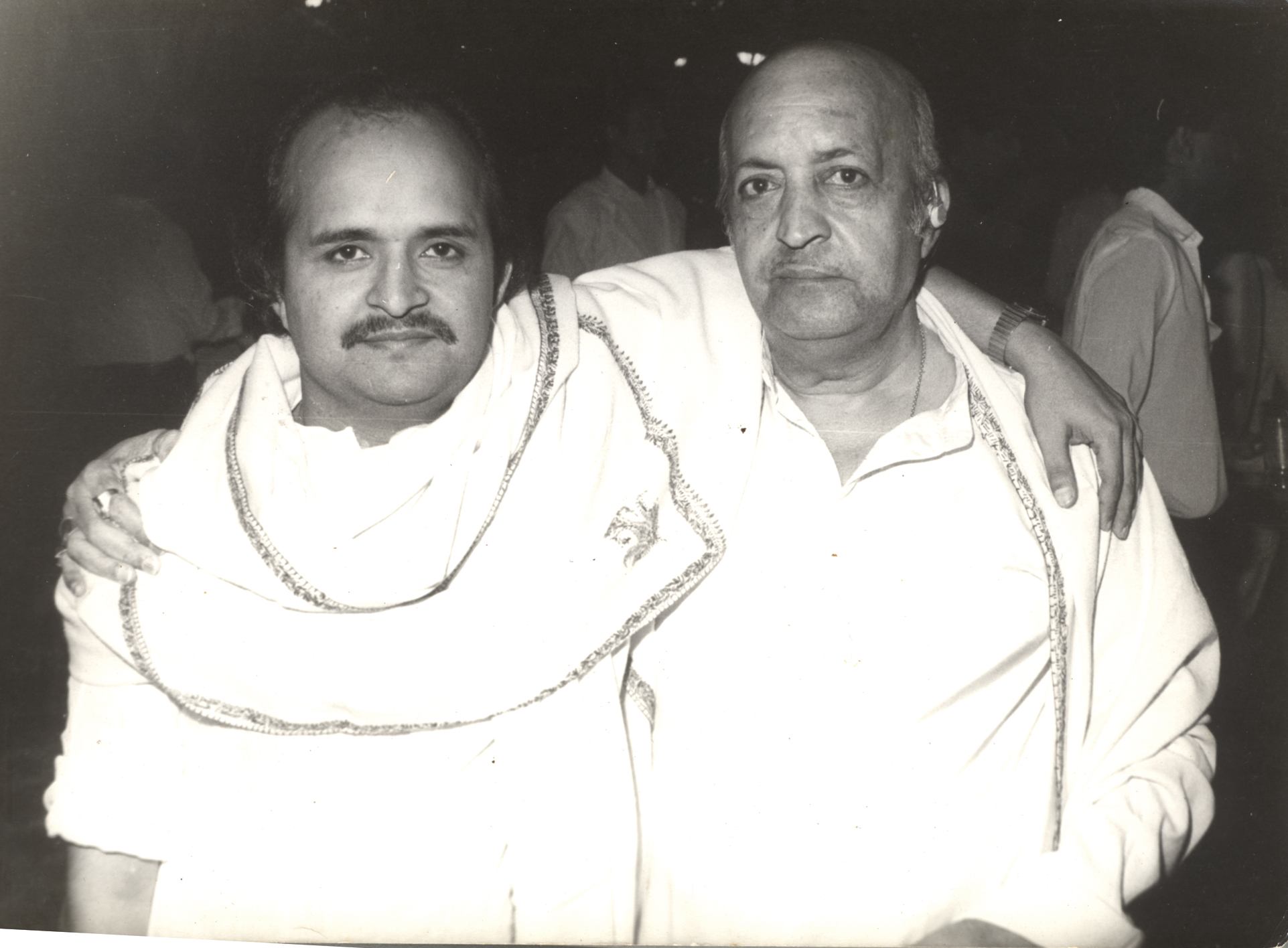 One morning, Anjaan was shocked to see his son, Sameer at the door with his luggage.Anjaan felt he was seeing a vision and when he realised the truth about Sameer who had just done his M.Com and had even given up his good job in a bank in Banaras to follow in his footsteps and try and be a lyricist, he grew hysteric and was joined by his brother Gopal, to try every way of driving him back home, but Sameer was determined to stay back. His father and uncle refused to give him a place to live in their apartment in King’s Apartments for long and Sameer found shelter with a sister who lived in a slum in Malad from where he started his real struggle.

He took up the job of selling washing soap from door to door to make a living, but his mind was focused on his goal of being recognised as a song writer in Bombay one day. That day did not come for days. He met some of the leading composers who completely discouraged him and one of them, Shyam Sagar who was father’s best friend and was living in a housing board tenement in D.N Nagar, Andheri, read what he had written and tore the pages and flung them in the stagnant gutter outside his window, but Sameer took all these humiliations in his stride and continued selling soap.

He had made friends with Anand and Milind who were the sons of Chitragupta and were like him struggling to make it as a team of composers. They spent most of their time writing and composing songs which had no future, but they did not give up. 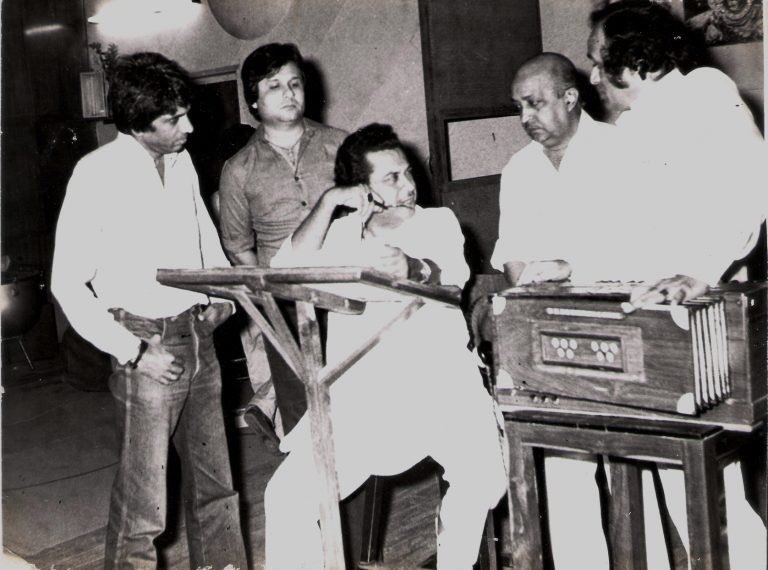 They however got their first big break in a film called “Ab Ayega Mazaa” which was produced by the well-known theatre and TV-actors, Alok Nath and Girija Shanker and directed by Pankaj Parashar who was a leading maker of ad films. Their very first song,“gaadi ke neeche kat jaungi was sung by Lata Mangeshkar and the news spread all over and it marked the beginning of a new team of Sameer and Anand-Milind. They scored the music for several other films, but couldn’t be as successful as they were in “Ab Ayega Mazaa”.

Sameer now knew that he would have to find other avenues and formed a formidable team with composers Nadeem-Shravan and Annu Malik, his songs became so popular that he became the first music director to win the Filmfare Award for the best lyricist three times in three consecutive years and his father, Anjaan who presented him with his first award openly cried on stage when he said, “main jo tees saal mein nahi kar saka mere ladke ne teen saal mein karke dikhaya. Isse badi khushi ek baap ko kya ho sakti hai.”At the same function Anjaan told the audience the story about how he had not only discouraged Sameer, but had also thrown him out of his house because he did not want him to suffer like he had in sixties. 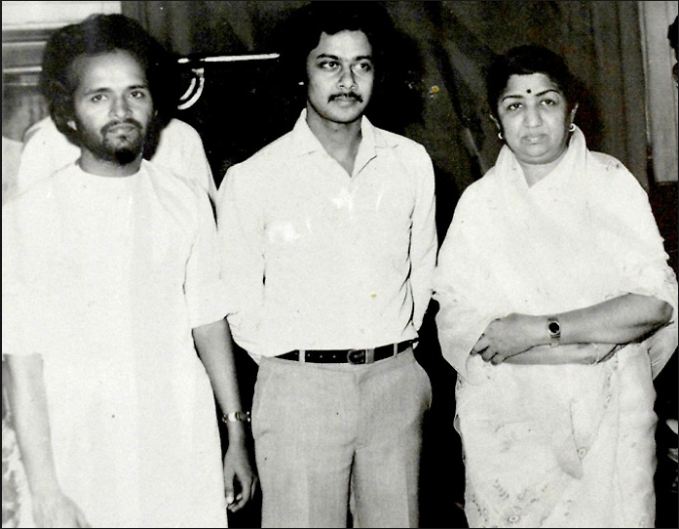 It was then a strange coincidence. The streak of success grew brighter for Sameer and his father had to take a back seat, not because of the query quality of his work, because of his serious health problems which first affected and damaged his hearing power and finally was killed by a mysterious disease of the brain.

Sameer seemed to be obsessed to do the kind of work that would make his father happy and a time came when he left all the ruling lyricists behind and was leading the race. He had written thirty-thousand songs which got him a place in the prestigious Guinness Book of Records which no other Asian had the honour of being a part. It was at this very time that Derrick Bose, who was otherwise a journalist who specialised in financial matters volunteered to write a biography of Sameer which was released by Amitabh Bachchan in the presence of a large gathering of the industry. His father was also there but we not there. He was brought to the auditorium on a stretcher and in a state of coma in which he was for more than two years and Sameer had turned a part of his huge apartment into a hospital with all the amenities and with doctors and nurses in duty 24×7 which was his way of paying tribute to his father…. 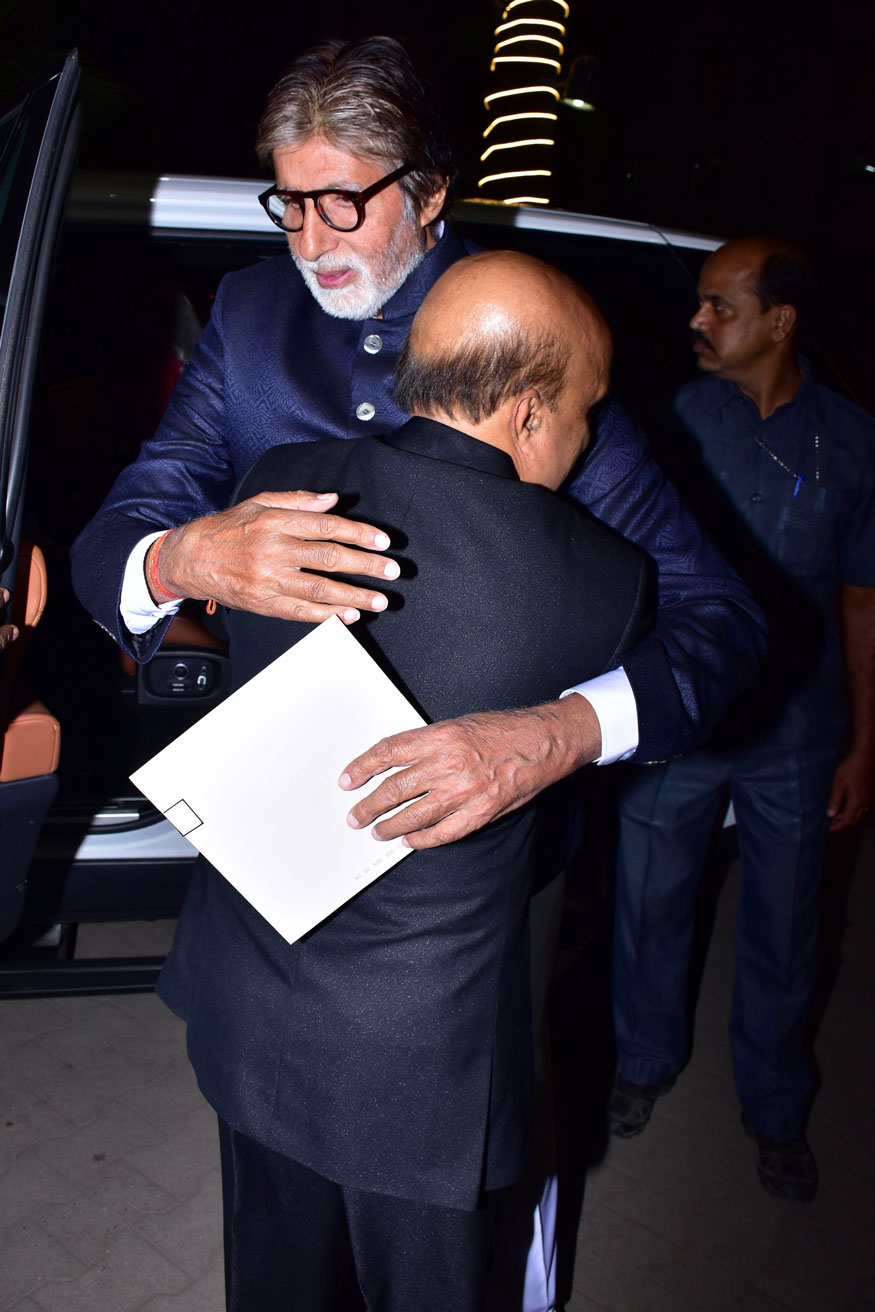 Every successful career has to have a slide and it came in the career of Sameer too. There were new lyricists like Irshad Kamil, Prasoon Joshi, Amitabh Bhattacharya, Manoj Muntasir and Kausar Muneer who came into the race and Sameer was slowly being pushed into the background. He however found other ways of being in the limelight and one of them was a radio show in which he narrated the story of his safar(journey) with the backdrop of some of his most popular songs. But that show too has not been a great success. It is a record for Sameer Anjaan to keep far away from being anjaan during the last forty years….

That he is still considered to be one of the leading poets can be seen from the way he has been the poet who has been chosen to write a patriotic song, with ‘Suno Gaur Se Duniyawalo’ (“Dus”, unreleased). Having often binged on tracks like ‘Sandese Aate Hai’ and ‘Ae Mere Watan Ke Logon’, Anjaan knew that he wouldn’t let an opportunity to work on a patriotic number go out of his hands. When the Indian Army then approached him to pen a track for Kargil Diwas (July 27), Anjaan was only happy to agree. 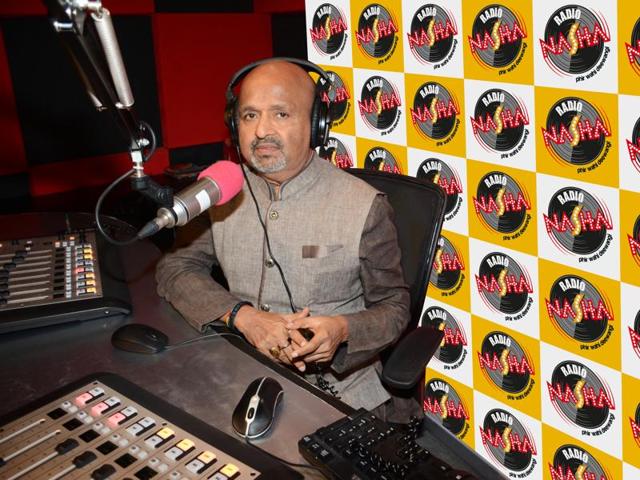 “The Army narrated stories of Vikram Batra and other martyrs, and asked me to see how the Army-men live. It’s hard for us to stay in an area where oxygen is less and temperatures are low. But they manage to stay there for several years,” says Anjaan, who visited the Army-men in their bunkers. “As they chronicled the stories, I was surprised to learn of a soldier who was upset for not being given the chance to go to the war-front and give his life for the country. It’s hard to comprehend their greatness.”

As it celebrates the lives lost at the war-front, the track has Anjaan’s words being performed by an array of celebrities, including Amitabh Bachchan, Vicky Kaushal, Fatima Sana Shaikh, Suniel Shetty and Kriti Sanon, among others. The track, Anjaan says, will be unveiled on the occasion by Prime Minister Narendra Modi.

At this point of his life, I wonder if he remembers the day when his father felt scared when he heard that he too wanted to be a poet and lyricist like him. And I wonder if he remembers how composers like Lakshmikant and Shyam Sagar threw out his poems and insulted him in a way which could kill a genuine poet, BUT THAT WAS NOT WHAT SAMEER ANJAAN WAS, HE HAD COME TO BOMBAY TO MAKE SURE THAT ANJAAN WAS ONLY A NAME AND THAT A GOOD AND SENSITIVE POET COULD NOT BE ANJAAN FOR LONG.

Kanagana Ranaut – Rajkummar Rao Ask You To Shave The Opinions And Come Be Judgementall On July 26th !