Sanjay Dutt And Madhuri Dixit Will Be Seen In Kalank After A Decade.

Actor Sanjay Dutt started shooting for Abhishek Varman’s Kalank and will be seen in the film alongside Madhuri Dixit Nene. Kalank is a period film that depicts pre-Independent India.

Other film co-stars are Varun Dhawan, Alia Bhatt, Sonakshi Sinha, Aditya Roy Kapoor and Kunal Kemmu and the movie is said to be released in April 2019. 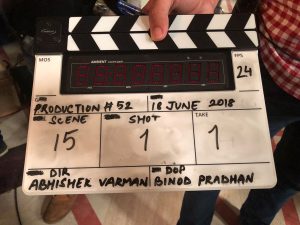 Produced by Dharma Productions, Kalank  will be casting Sanjay Dutt and Madhuri Dixit after a gap of 21 years.Though earlier Madhuri’s role was offered to late actress Sridevi.

Mahaanta, Saajan and Khalnayak are a few movies in which Sanjay Dutt and Madhuri Dixit were seen together.

The shooting began this Monday and presently Sanjay Dutt will be shooting his scenes with Aditya Roy Kapur and Sonakshi Sinha, Mumbai Mirror reported.

Besides this, Sanjay Dutt will be seen in Torbaaz, Saheb, Biwi Aur Gangster 3, Panipat and a remake of Telugu film Prasthanam.

RANBIR KAPOOR: I WANT MY OWN CHILDREN, MY WIFE; I HOPE I’LL HAVE THAT PRIVILEGE SOON