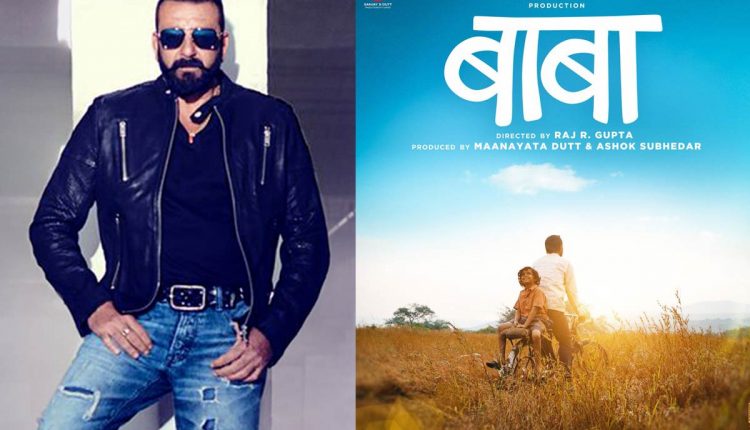 Sanjay Dutt has now decided to try his hand at producing a film in Marathi called Baba with his wife Maanayata Dutt under his banner Sanjay S Dutt Productions in tandem with Ashok Subhedar and Aarti Subhedar, who had produced Bucket List which starred Madhuri Dixit as the leading lady for the first time in Marathi films under the banner of Blue Mustang Creations. Baba is Sanjay Dutt’s’ first venture into Marathi films alongside Blue Mustang who had produced the Marathi film Bucket List.After giving several Bollywood hits, Sanjay Dutt is all set to venture into Marathi regional cinema. Sanjay Dutt is the latest B-town star to follow in the footsteps of Priyanka Chopra, Akshay Kumar and Madhuri Dixit and announce his first Marathi film featuring NSD trained and Tanu Weds Manu fame – Deepak Dobriyal, (for the first time in Marathi) and Nandita Dhuri Patkar ably supported by Spruha Joshi, Abhijeet Khandkekar, Chittaranjan Giri, Jaywant Walker and the very adorable child artist Aaryan Menghji. The film Baba will be directed by Raj R Gupta (Associate director Bucket List) and the director of the short film Dhagha which is being streamed on Zee 5. Baba is based on the story of a unique & poor couple Madhav & Aanandi, staying far away from a bustling village situated in beautiful Konkan, Maharashtra. With the grace of God, their world is silent yet they are very happy and contended. They have an eight year old adorable son who also does not speak and they never take him anywhere out of fear of losing him. One day a high profile couple comes to their home to take the boy away from them. The film is about whether through the ups and downs of legal battle and his personal challenges, a father’s love succeeds in retaining his beloved son or not”, says  Ashok Subhedar -Blue Mustang Creations .The film Baba is slated to be released on 2nd August 2019, within a span of just a month and a half of its announcement. Says Sanjay Dutt,  “I have always believed that since Maharashtra is my janambhoomi as well as karambhoomi, it is my duty to contribute towards its culture by producing films in Marathi as it has a rich culture and ethos of its own.”

Dedicating our first Marathi film “BABA” to the person who remained steadfast in my life through everything! Love you Dad.#BabaOn2Aug – produced under the banner of @SanjayDuttsProd & @bluemustangcs
Directed By: @RAjRGupta2 pic.twitter.com/Ktg9fPQ1DQ

Excessive Stress In The Film Industry Leads To Depression Among The Cast & Crews, Says Aditi Govitrikar