Shahid Kapoor has been shooting for his upcoming movie Batti Gul Meter Chalu in Uttrakhand. The shooting is going on in full swing and the actor is doing his best to get the character right.

Here you can have a look at the picture; 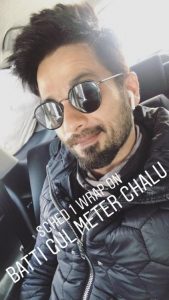 In interaction with a leading daily, Shahid said; “Shree Narayan Singh, who earlier made Toilet: Ek Prem Katha, will be directing this film. Toilet was also about a social issue, and this time he chose an issue on electricity. So it’s a relatable subject. I’m excited to start with this new project. Now that Padmaavat has released, it’s out of my system. I can move on. I was stuck on Padmaavat all this while.”

Shahid Kapoor is playing the role of a lawyer in the film. The movie also stars Shraddha Kapoor and Yami Gautam and is slated to release on August 31, 2018.