Shammi Kapoor’s Success Is A Slap On Nepotism’s face

His father was the first rebel in the Kapoor family Prithviraj Kapoor. Basheswarnath Kapoor was the head of a leading business house in pre-partition Peshawar (now in Pakistan). Prithviraj was he is the eldest son. He was tall, broad, shouldered, fair-skinned and very handsome. “He was so good-looking that every girl was in love with him and every father or mother wanted their daughters to get married to him”, Shammi Kapoor fondly remembers.

Prithviraj was not interested in the family business. He was not a very educated man, but he loved reading Urdu plays which got him interested in playing the characters in the various plays. His father refused to give him permission to be an actor and wondered who put this ‘devilish idea’ in his mind and said “if I decided to be an actor he would not be able to see me, my family and generations of Kapoors starve and not even have a shelter over their heads”.

Prithviraj however ran away from home and landed in what was still to be independent India. He was lucky to find work in some small theatre groups, then joined IPTA and finally formed his own company and named it Prithvi Theatre, a platform from where messages were sent about the enmity between India and Pakistan, between Hindus & Muslims and about the various everyday problems faced by the common man. Prithvi Theatre did not charge the audience any fees, but at the end of every show Prithviraj himself and all the members of the cast stood outside the theatre and people dropped money into their bags and that was their only collection after every show.

Prithviraj who lived in Matunga where many of his friends from theatre and films lived had three sons, Raj, Shammi and Shashi. They were all drop outs from school and were only interested in following in their father’s footsteps. Raj was the first to join Prithvi Theatre and had to do all the jobs that an ordinary spot boy did and even had to sweep the floor if he had to find even a bit role in his father’s plays. Raj accepted all his father’s conditions and so did Shammi when he too surprised his father by telling him that he wanted to be an actor, come what may. Shammi worked in a couple of plays staged by Prithvi and finally told his father that he wanted to go out into the world and find a place for himself. His father agreed but said very firmly that he would not help him in any way if he came back as a defeated man.

Shammi walked all over the studios without letting any one know that he was the son on Prithviraj Kapoor. He finally found a leading role in a film called ‘Rail Ka Dibba’ because no other actor wanted to act in the film. Shammi put his life into the film but when the film was released, he first saw how the producer had vanished without even paying him his paltry fees, and Shammi was left all alone, like a empty compartment of a train (Rail Ka Dibba).

Shammi had many reasons to give up and go back to his father and say, ‘mai haar gaya, mujhe maaf kar do’, but there was that rare fire in him that did not let him do anything like that.

The industry slowly came to know that he was the son of Prithviraj Kapoor and the brother of Raj Kapoor who had already made a name for himself as an actor and a director. There were many who believed there could be something special about this young man and they signed him for some small films which flopped miserably and Shammi was left in ‘Misery Land’.

It was during his lean and jobless days that he thought of trying out one of his ideas which he felt could work. He decided to see all the dances and songs of Elvis Presley and Cliff Richards, watched them dancing very closely, wore the kind of colourful clothes they wore, tried his best to have their kind of hair style and their ways of handling the masses who thronged places where they performed. His efforts worked and he was transformed into a new Shammi Kapoor who was first discovered by Nasir Husain (uncle of Aamir Khan) who was impressed by his personality and asked his producer, S.Mukherjee, the owner of Filmalaya Studios (Kajol’s grandfather) to try him out. Mukherjee had no objection as long as his director had faith in Shammi. The result was a film called ‘Tumsa Nahi Dekha’ with a new actress called Ameeta. The film had some very outstanding music to which Shammi danced as if his life depended on those dances. The film was a very big hit and the leading publicist of the times, Bunny Reuben coined a phrase to describe the new Shammi. He gave him the title, ‘the Rebel Star’ because there were the three legends who were ruling as stars during those days, Dilip Kumar, Dev Anand and Raj Kapoor.

Now Shammi had nothing to worry because he was flooded with offers to play similar roles. There were films like ‘China Town’, ‘Singapore’, ‘Bluff Master’ and ‘Dil Deke Dekho’, one a bigger hit than the other, all of them films in black and white but films which made the kind of impact that brought in the audiences in large numbers. However, Shammi reached a new high when he was chosen to play the junglee in Subodh Mukherjee’s film of the same name, “Junglee” with a beautiful girl who had just returned from abroad, Saira Banu as his heroine. The moment he jumped on the slopes of Kashmir and sang, ‘yahoo’ he was the greatest entertainer of the 60s who was to rule for the next twenty years. 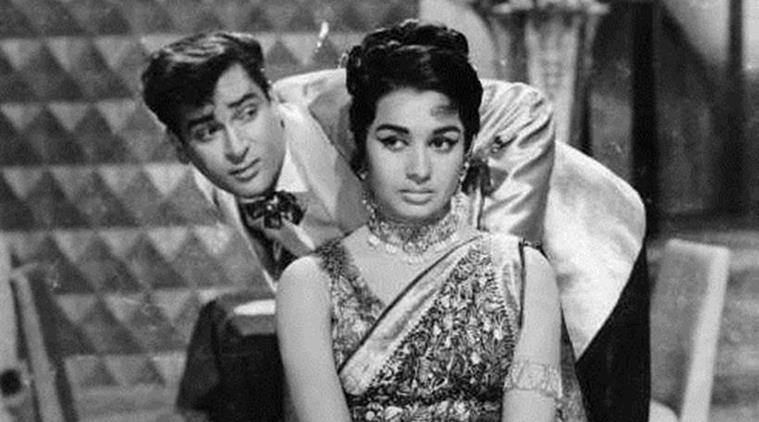 He was perhaps the only actor in the world who shone in films with negative titles like ‘Junglee’, ‘Badtameez’, ‘Janwar’ and ‘Pagla Kahi Ka’ among others. He however also came up with some brilliant performances in film like ‘Professor’, ‘Prince’ ‘Raj Kumar’, ‘Pritam’ and ‘Sacchhai’. But Shammi Kapoor the star reached his tallest peak when he played the hero in Vijay Anand’s ‘Teesri Manzil’. His dances in the film, the music of R.D Burman and the story of the film itself led the film to become a cult film.

It was at the same time that he got a chance to prove himself as an actor. He was the hero of Bhappi Sonie’s ‘Brahmachari’ in which he was a bachelor who looked after a number of orphans. He had two heroines in the film, Rajshri and Mumtaz and the children who were all born natural actors. The film got Shammi all the appreciation and also the first ever Filmfare award for his performance in the film. The film, incidentally, was a source of inspiration for ‘Mr.India’ which was made with Anil Kapoor many years later.

Shammi had the rare distinction of working with one director Shakti Samanta in seven different films, ‘China Town’, ‘Singapore’, ‘Kashmir Ki Kali’, ‘An Evening in Paris’, ‘Janwar’, Pagla Kahika’ and ‘Jawan Mohabbat’. He was also the actor who did not have any problems working with girls who were making their debut with him. He had Ameeta in ‘Tumsa Nahi Dekha’, Kalpana in ‘Professor’, Asha Parekh in ‘Dil Deke Dekho’, Sharmila Tagore in ‘Kashmir Ki Kali’ and Saira Banu in ‘Junglee’.

The untimely death of his actress-wife Geeta Bali made him loose all interest in life and his career. He took a break and went into the hills to find what he called spiritual peace. When he came back after five years he was a very different version of the early Shammi Kapoor. He had put on excessive weight and had lost almost all his hair and was wearing a string of malas round his neck with beads of all colours and of different stones. It took him quite sometime to come back to normal and return to work as an actor. He was offered any number of character roles with the highest price paid to any other character actor but he accepted only a few. Of all the characters he played he remembers his role in ‘Vidhaata’ only because he had a chance of working with the legendary Dilip Kumar with whom he always had the dream to act with. The other character he loved playing was in ‘Prem Rog’, directed by his brother Raj Kapoor with whom he had wanted to work as a leading man at one time but was not so lucky. He also remembers a film called ‘Aahista Aahista’ not because of the character he played but because of an incident that took place during the shooting of the film. Prince Charles had come to India on his first visit and he wanted to see a film studio and he was taken to Rajkamal Studio. All the artists were introduced to the Prince by Dr.V.Shantaram, the owner of the studio, but when he came to Shammi he stopped and the Prince stopped with him. Dr.Shantaram said, ‘this is Shammi Kapoor, he has been one of the greatest dancing stars of India, many others have tried to imitate him but none of them have succeeded’. Shammi says those words of Dr.Shantaram were much more precious than all the awards any actor could win. 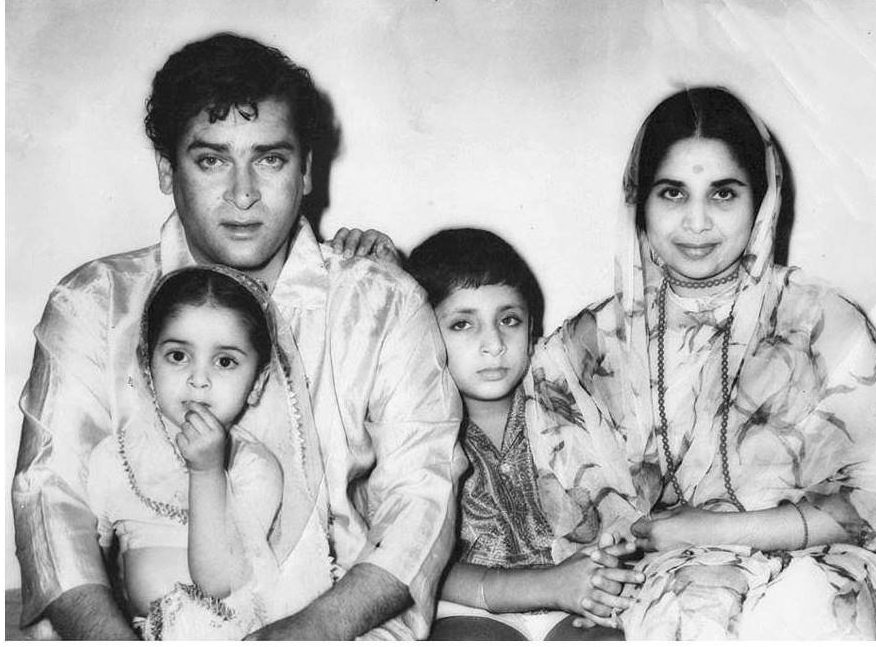 Shammi was also a very smart businessman. He got into a partnership with a leading filmmaker like F.C.Mehra and together they owned the Minerva Talkies in Bombay and Golcha in Delhi. He also tried his hand at directing films and made ‘Manoranjan’ based on the Hollywood hit ‘Irma La Douce’ and ‘Bundlebaaz’ with Rajesh Khanna, but both the films flopped and he decided never to direct a film again. He was the same Shammi who was once supposed to guide directors like Shakti Samanta, Bhappi Soni and above all Ramesh Sippy who went on to make ‘Sholay’. He married Neela Devi, the Princess of Bhavnagar as his second wife. His daughter Kanchan is married to Ketan Desai, the son of his best friend, the Late Manmohan Desai and his son Aditya has started acting at the age of 50 and Shammi says ‘It is better late than never and I hope that he keeps up to the Kapoor tradition because it is a very precious heritage which all the Kapoors have inherited’.

Shammi had to face some very painful times when both his kidneys failed and he had to undergo dialysis four times a week but his zest for life still remained the same. He could still drive the latest Mercedez all on his own and he once told his grand nephew Ranbir Kapoor, ‘You have to live till you die, what’s the use of dying even while you are alive? he asked. He died a few weeks later and made front page news all over the country.

Now All is well with Veteran Actor Manoj Kumar

Sanju’s La Trobe screening gets a standing ovation, Simi Garewal pays a beautiful tribute to Shashi Kapoor at the Siddharth screening on Day 4 of IFFM