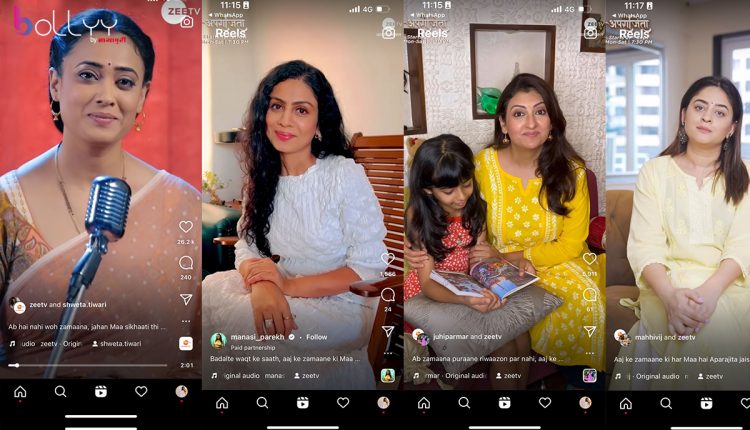 Over the past 30 years, Zee TV has emerged as a leading broadcaster that brings its viewers stories on subjects close to their hearts and introduces them to characters that become an integral part of their daily lives! And once again, the channel joined hands with Bodhi Tree Productions to present its viewers with a new fiction offering – ‘Main HoonAparajita’. The show follows the heart-warming journey of a doting mother who is preparing her three daughters for the rollercoaster called life after her ex-husband Akshay finds love outside the marriage and abandons them! In the run-up to the much-awaited launch of the show, its lead actress Shweta Tiwari has put out an evocative monologue on her social feed featuring herself as the character Aparajita, narrating in verse the evolving role of a mother in the current context. The thought-provoking video that touches upon nuances of motherhood and speaks of equipping your daughters from an early stage to be strong and face the curveballs of life with a relentless spirit has made waves on social media, crossing 1 Mn views in a short span of time. Apart from spreading like wild fire across social media, this heartwarming ode to motherhood has touched an emotional chord with several celebrity moms from the entertainment fraternity including Juhi Parmar, Barkha Sengupta, Manasi Parekh, MahhiVij ,CharuAsopa and Teejay Sidhu.

Check out the video here:

Inspired by Shweta, Juhi Parmar, Barkha Sengupta, Manasi Parekh, MahhiVij, CharuAsopa and Teejay Sidhu also took the initiative forward as they resonated with Aparajita’s idea of upbringing her daughters, while talking about Main HoonAparajita’s unique storyline. The popular celebrity mothers expressed on social media how the world expects a quintessential mother to be and how it’s always the mother who is accountable for her daughter’s upbringing and moral values. However, in today’s world, every mother is teaching their daughter to be strong, independent and self-reliant. In line with the show’s core premise of a mother single-handedly raising her three daughters, the actresses also talked about how Aparajita is an inspiration to all the mothers out there!

Check out their videos here:

To follow the gripping journey of a single mother and her three daughters, tune into ‘Main HoonAparajita’, every Monday to Saturday at 7:30 pm, only on Zee TV!

A SONG FOR EVERYONE WHO BELIEVES IN LOVE AND THE MAGIC OF SECOND CHANCE, SUKRITI – PRAKRITI’S DOBARA IS OUT NOW