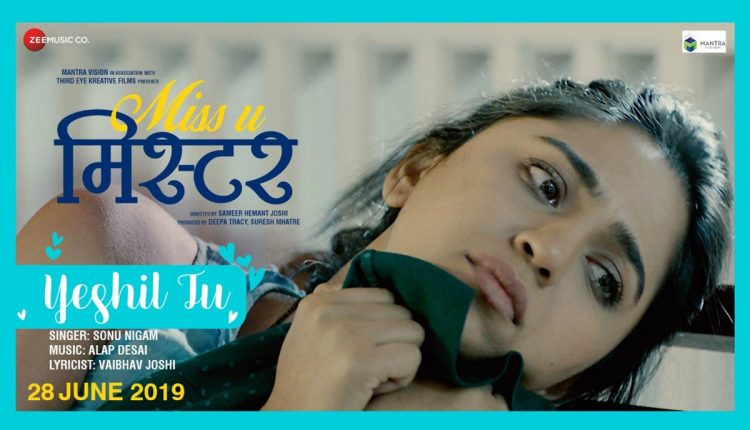 Amid the buzz about the Miss U Mister among the film goers because of Siddharth Chandrakar and Mrinmayee Deshpande, the glamorous actors in lead role in Miss U Mister,a Marathi movie releasing on June 28. Sameer Joshi, who has many hit films and popular TV serials to his credit, is directing the film which is produced by Deepa Tracy and Suresh Mhatre .The movie is presented by Mantra Vision in association with Third Eye Kreative Films.  Miss U Mister, is a family entertainment revolving around relationships with a spice of surprises and twists added to the story and characters in the movie are played by  leading actors such as Rajan Bhise, Savita Prabhune, Avinash Narkar, Radhika Vidyasagar are other stars in Marathi films, plays and TV serials.The film has a song sung by Sonu Nigam. After its recent release, the song has received overwhelming response I’m terms of likes and hits.  “Mala mahit aahe ase honar ahe, fulanni malavlelyacha Ruth yenar aahe. Tula Mee pahato mhanun…” is the song with intensive wording and melodious tune. Sonu Nigam has called it one of the best songs of his life.The song has been composed by Aalap Desai a leading music director from the Gujarati industry.  The song has been very beautifully penned by lyricist Vaibhav Joshi’

Sonu Nigam says “that the song is like a prayer. “I have sung many popular songs in my life. But it wouldn’t be an exaggeration if I say this is one of the best songs of my life. Aalap Desai has done a wonderful job. Even the person who does understand meaning of the wording will be mesmerised by the song. I am lucky to have this song as a singer. This song will have a special place in my singing career,” he said. Aalap Desai said, “We have tried to give something different and unique. It is an attempt to express meaningful things by using a very few instruments. The background has been created by using very limited instruments such as Harmonica, Guitar, Harp etc. The music lovers will get a soothing experience from the song.

Boudoir Et Jardin Hosts A Birthday Party For Priyanka Chopra’s Mother Before Unveiling To The Public!