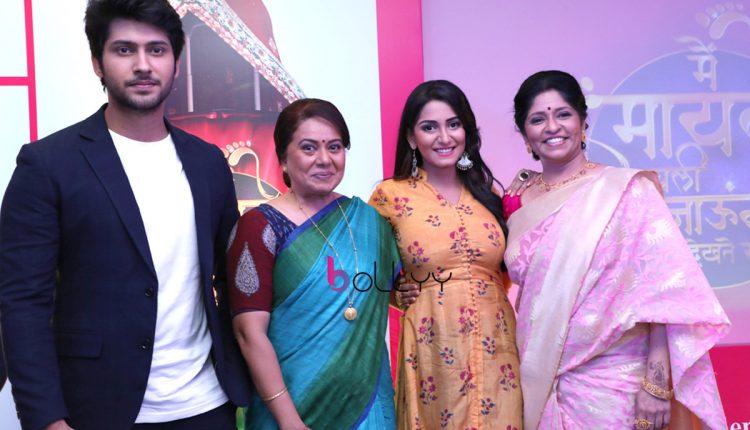 Gone are the days where marriage would mean the end of parent’s direct involvement in their daughter’s life. Nuclear families, gender equality and many other progressive views have created a positive change in the society. The relationship between the parents and their daughters in today’s times doesn’t change much pre and post marriage, when it comes to being adequately involved in each other’s lives. However, in few cases, parental involvement can also turn into obsessive interference and this creates a new challenge for the married couple.

Exploring one such mother-daughter relationship and the interference of this mother in her daughter’s marriage, Sony Entertainment Television is all geared up to present a slice of life dramedy – Main Maayke Chali Jaungi Tum Dekhte Rahiyo. This mother strongly believes in beti ko bas vida kiya hai, alvida nahin, maintaining a strong presence in her daughter’s life post marriage. Produced by Dheeraj Sarna’s Kagaz Kalam Films, the show is slated to launch on Sony Entertainment Television on September 11, 2018 and will air every Monday to Friday at 8:30 pm.

The show follows the antics of the sweet and gullible bahu, Jaya, a wedding planner by profession, who keeps threatening her husband to go back to her maayka, under the influence of her overprotective mother Satya Devi. What might be the reason? One phone-call by her mother, leads her to believe that her independence is under threat at her sasuraal. But is her life post marriage really that miserable? How will Samar, the loving husband that he is, bridge the gap? Set in the lovely city of Bhopal, the show aims to capture the essence of how over interference of parents can become a nemesis to their children’s marital independence.

Main Maayke Chali Jaungi Tum Dekhte Rahiyo features a stellar cast with popular faces from the Indian television Industry. The show marks the return of actress Neelu Waghela on television as the no-nonsense lawyer Satya Devi. Popular actors Srishti Jain and Namish Taneja will be seen portraying the lead roles of Jaya and Samar – the married couple. Aditi Deshpande will be enacting the role of the accommodating and understanding mother-in-law, Rama.

“I am still dependent on my own mother for a lot of things even though I am a mother myself now. So, it didn’t take me time to understand the character of Satya Devi. She is overprotective about her children and especially Jaya as she is the youngest one and I feel most women will relate to this emotion. In fact, my husband keeps joking that I am already being trained for the future considering I have a daughter (laughs). We have received some really good response to the promos that are on-air and I am certain the audience will also enjoy the show.”

Aditi Deshpande, noted actor who essays the character of Rama

“I look forward to spending time with my colleagues because we have all become one big happy family. It doesn’t feel like we are essaying characters… we are living the show. Main Maayke Chali Jaaungi Tum Dekhte Rahiyo is very beautifully written and I feel that as a show it caters to the entire family.”

Namish Taneja, popular actor who essays the character of Samar

“Firstly, I must tell you that visiting Delhi is like homecoming for me! I will always be a Delhi boy at heart even though I have moved to Mumbai for my work commitments. My character Samar, in Main Maayke Chali Jaaungi shares a very close knot bond with his family and it wasn’t difficult for me to slip into this character. A lot of my mannerisms that you will see on-screen are a result of my observation within my own set of family and friends. The husband always gets stuck between his wife and family, but here you will see poor Samar stuck between his wife and his mother-in-law.”

Srishti Jain, popular actor who essays the character of Jaya

“Jaya is like Kareena Kapoor from Jab We Met. Full of life and vivacious. Her only weakness is the love she has for her mother Satya Devi. How this love over powers her relationships post marriage is what the audience will enjoy.”