The special screening of the short film Raat Baaki Baat Baaki was held in Mumbai. The film is starring Jackie Shroff in pivotal role along with Shubhangi Latkar, Akshay Nalawade, Bhawsheel Singh Sahni, Semal Bhat and Rohit Lamba as costars. The film is directed by Divyansh Pandit and got nominated at Filmfare awards 2019 under short film category.  The veteran director Raj Kumar Santoshi and the actor Jackie Shroff were the chief guest of the event. The film is a light mood comedy with emotional drama.

The film is produced by Arushi Pandit and Chesta Pandit. Aayush Gaur and Divyansh Pandit have written the film. The music and background score are given by Semal and Nikhil. Gaurav Bhan has sung the song and Shankar Singh has given the sound. Lyrics are given by Semal Bhatt and cinematography is done by Sarfraz Ali Hasan Khan. Shubhankar Jadhav is the editor of the film.

The story of the film revolves around an Old man (Jackie Shroff) and 4 youngsters who are really close friends. A ‘young’ old man plays the mentor to the 4 youngsters, who stay in the same society, but are facing different problems. Their stories converge for a night when they come across a life changing experience through some alcohol, some secrets and loads of fun.

The shooting of the film is completed in Mumbai and is all set to release on YouTube in Wild Buffaloes entertainment channel on 25th March, 2019.

On this occasion Divyansh Pandit excitedly quoted that “I’m working with Mr. Jackie Shroff for the first time. WHAT A MAN he is”. He further said when Aayush Gaur approached him with the idea of the film, they together worked on the script and presented to Jackie Shroff. Jaggu dada was keen to do this film and had given quite interesting inputs and even improvised some moments. On working with Jackie Shroff he said, he made us feel comfortable and the shooting seemed to be an event. In a 3 days shoot, they all turned out to be friends. He also said “The world will see Jackie sir like never before” On being asked about the nominations in filmfare he said its an amazingly different feeling. “I have grown up watching these award shows on TV and it feels surreal when my own film is under such a prestigious nomination. This is 3rd consecutive time my film is been nominated in filmfare”. On the subject of the film he said, “The film is about relationships where age is no bar, it’s about living life to the fullest even when the time is dark in one’s life” The short film apparently has got fantastic response at Kala Ghoda art festival, 2019. He also said “Watch out for the climax. You won’t be disappointed I promise”. According to him, short films are believed to be of serious genre by a lot of aspiring filmmakers. He says “Short films need not be serious. There’s no set pattern. It’s the filmmaker’s choice however he or she wants to tell a story. People will see Jaggu dada in a completely new role. In Raat Baaki Baat Baaki, the audience will get to experience both laughter and emotions. He further said Jaggu dada had asked to take care of a child instead of paying him anything.

On this occasion, actor Jackie Shroff said that “Short films are unique because you have to tell a story in short time. Divyansh has handled me very well & you’ll can see it in the film”. He further said “Divyansh and his entire team is very talented and hard working. Young filmmakers are doing a great job through these films. I get to learn a lot from the younger generation, ‘Raat Baaki Baat Baaki’ will give today’s youth a new perspective to understand life and relationships. We should give youngsters  a chance to show their talent as they are budding artists and the future of industry.” On being asked about the noble cause close to his heart he said if everyone focuses on Jai Jawan Jai Kisaan, entire community will come together with same thought. 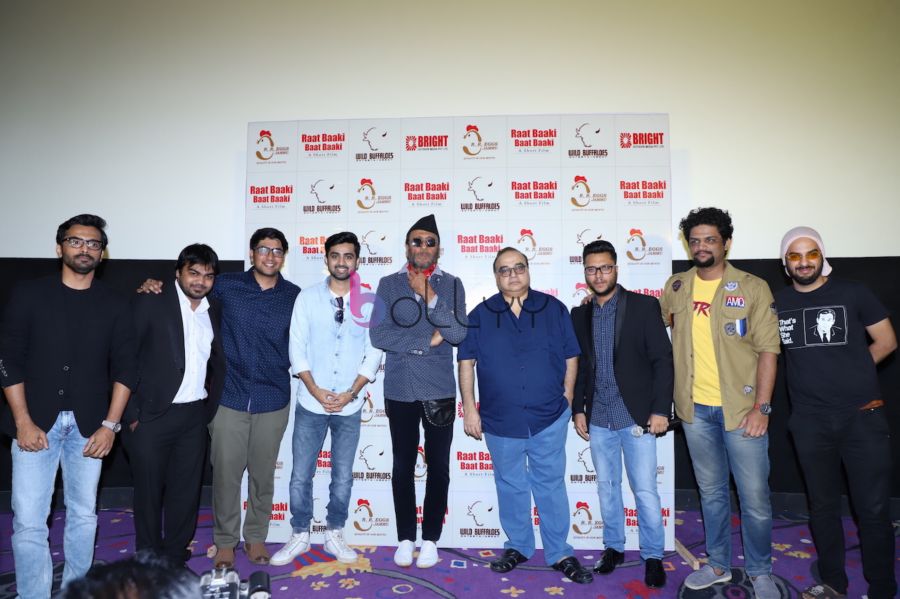