Sridevi This Woman Deserves More Than She Has

The actress who has been a winner of hearts since the time she was six and went on to become the queen of Indian cinema and then gave up all her name and fame to marry Boney Kapoor.

All her admirers of the time gone by and all those of the new generation who have only heard about her or seen her on television are eagerly waiting to see if she can still work the same magic she once did.

Her coming back gives me an opportunity to go back and remember the times I was a witness to, all the time from the days when she started till she quit for reasons that were more precious to her.

The first time I saw Sridevi was at the Tea Centre which was a popular place in Churchgate where exhibitions, meetings, press shows and press conferences were held.

There was a new actress who was his heroine. She was reluctant to go up the dais and behaved like a school girl who was being forced to do something she didn’t like.

Finally, the director of the film said something to her in Telugu and she quietly walked up and joined Amol and the director.

She refused to talk for some time till the director again said something to her and then she only said “yes” or “no” or shook her head both ways and up and down and at one stage was on the verge of tears and showed signs of running away till the director pulled her hand and made her sit down and she never opened her mouth again.

Sridevi was praised by all the critics, but the film flopped at the box-OFFICE

That actress was the young Sridevi. It was Amol Palekar who did all the talking for her when he said, “she is simply brilliant, a natural actress, the kind of which I have not worked with in any of my films.

She may look dumb to you but you place her before a camera and ask her to perform the most DIFFICULT scene and she is pure magic.

If she continues like this, I see a very bright future for her and she has all the potential to make it as one of the best actresses in India.

” Sridevi looked at the floor all the time and did not show any reaction to all that Amol had said in praise of her. The film was released. It was appreciated.

This new actress, Sridevi was praised by all the critics, but the film flopped at the box-OFFICE and Sridevi went back to do Telugu films and rose to become the most popular and successful actress…

Raghavendra Rao, had worked with Sridevi in a number of Telugu films and opted her for Himmatwala

Then it happened in the eighties. A number of film makers from the south had taken to making films in Hindi and K. Raghavendra Rao who was called “The Manmohan Desai of the south” and had a clause in his contract with his producers which said that his degree “B.Sc” should go with his name in all the credit titles was one of them.

He was making his first film in Hindi called “Himmatwala”. Jeetendra like in all other Hindi films made by the south was also the hero of the film.

Raghavendra Rao, B.Sc who had worked with Sridevi in a number of Telugu films opted for her and Jeetendra had no objections.

The shooting began in Hyderabad and the producer decided to invite some important members of the press from Bombay to cover the shooting and introduce Sridevi to them.

The publicist of the film who was also the publicist for all the other Hindi films made in the south tried his best to get journalists interested in going to Hyderabad and the one line he used the most was, “come and see the number one actress of the south and moreover she is shooting an entire song wearing only a swimming costume for the first time.

You will get a chance to see her thunder thighs.” His ways worked and we, a group of journalists from Bombay reached the Banjara Hotel in Hyderabad and were treated like royalty, with a suite in the Hotel for each one of us.

The same afternoon we were taken to the location where the film was being shot. Sridevi was very much there in the much- talked about swimming costume but the moment she saw us she ran into her room and called Raghavendra Rao B.Sc and had a long discussion with him.

She was not told about us coming to the shooting and refused to shoot as long as we were around. 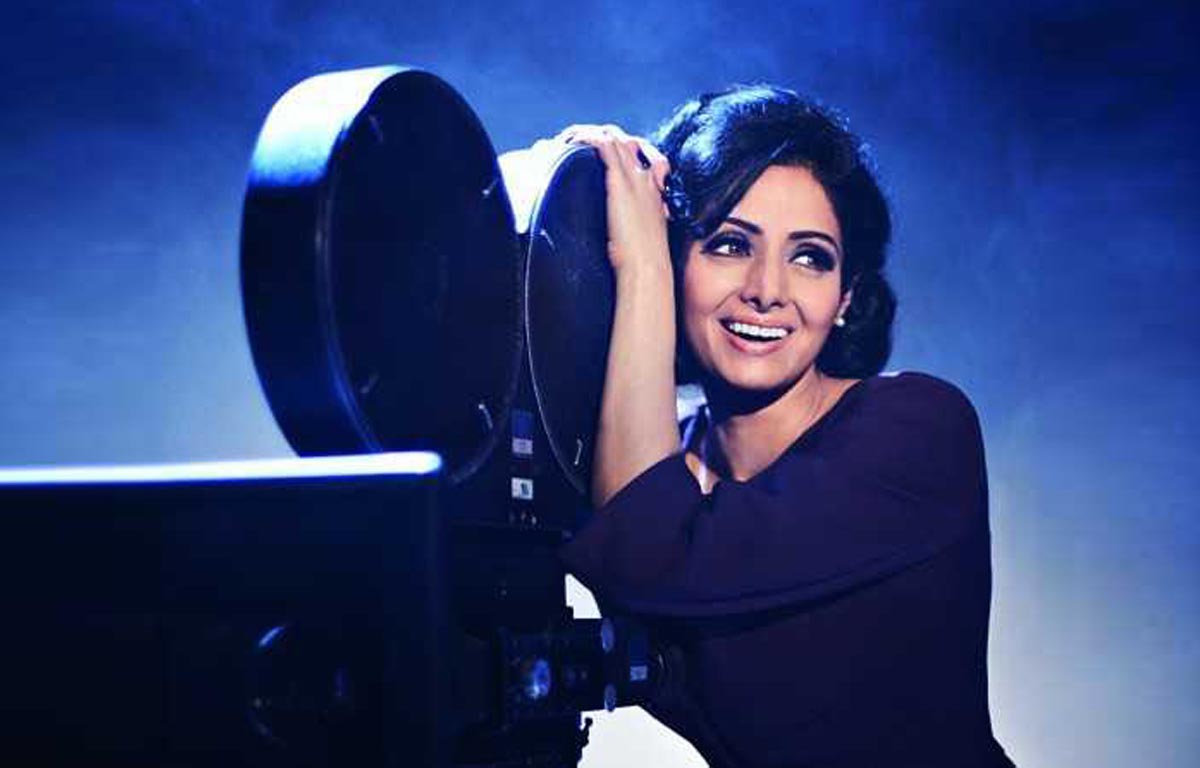 The director was a very powerful man and had put some of the biggest stars in their places and had succeeded again when Sridevi came out and was introduced to all of us by the director.

She just nodded her head and passed by each of us without even giving us a look. The shooting continued and the photographer who accompanied us kept pestering the director and the publicist to ask her to pose for a solo photograph in her swimming costume.

It would be a scoop picture for him, but all the efforts made by everyone failed as she refused to pose for any magazine or newspaper and told the director that the photographs taken by the still photographer of the company should not go to any magazine till the film was released.

The photographer felt defeated because he had photographed the best leading ladies of Bombay in more revealing costumes.

Our problems with Madam Sridevi did not end. The same evening the director and publicist had organized interviews for all of us with the number one actress.

We were made to stand in a queue and found to our dismay how everyone was out of the room in just five minutes.

How could an interview be done in just five minutes? The answer came from every journalist who met her and said, “She is so dumb, she only answers questions in yes and no or just keeps silent when asked the most serious questions”. Raghavendra Rao B.Sc came up with an idea.

He said he would take me in and he would translate all my questions and give me the answers she gave.

For the first time all the journalists agreed to take help from another journalist because they had to give some account about their outing in Hyderabad.

It was the power of Sridevi that made all the journalists depend on me to get some kind of an interview “with the most DIFFICULT woman we have met”, a senior female journalist said in disgust.

The film, “Himmatwala” was a very big hit and even the hero, Jeetendra gave all the credit to Sridevi and her scenes and that swimming costume which revealed her thighs which people went to see her again and again.

The success led to Sridevi signing any number of films in the south, all of them made in Hindi and she had no time to do films in Telugu.

It was during the time that she reigned that I had the opportunity of visiting Hyderabad at least twice a month.

She was the same Sridevi, she hardly talked to anyone, not just the press. It was during the shooting of a film that I saw a very crazy scene.

Sridevi was driving to a location in Rajahmundry when suddenly we saw at least a hundred people, men, women and children lying on the road.

They had come to know that Sridevi was to pass that way and this was the only way they could stop her and have a glimpse of her.

It happened just like that. Sridevi got out of her car and just did a “namaskar” to the crowd and smiled at them.

They clapped and allowed Sridevi to pass. “These fans are totally mad about her. They can even give away their lives for her,” Dr. Rama Naidu, the Dada Saheb Phalke award winner who was the producer of the film told me.

Sridevi soon became a big rage in Bombay too. She started with some small films but it took her very little time to be noticed by directors like Shekhar Kapur, Subhash Ghai and Yash Chopra. 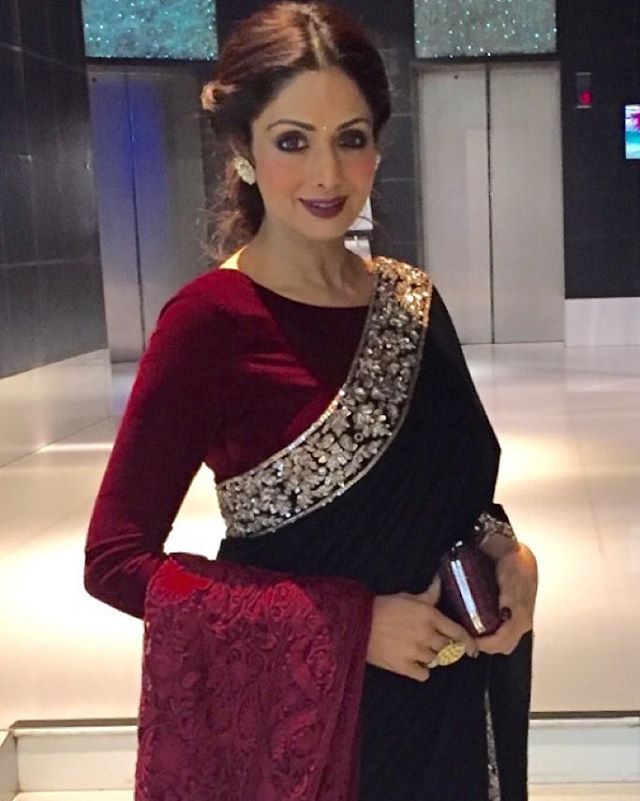 It was Yash who brought out the best of the actress in her and he had something very interesting to say about her when he exclaimed after a shot, “she is like a switch on and switch off actress.

You just tell her what you want and she will give you a blank look, but the moment she faces the camera she turns into the character you want her to play. I have worked with the best actresses but no one like her.”

The only time Sridevi found time to do a Telugu film was when Raghavendra Rao B.Sc planned to make the most ambitious film of his career, “Apsara”.

He couldn’t think of anyone but Sridevi as the “Apsara” (Fairy). The film miserably flopped and that was the end of her career in Telugu films.

It was also the beginning of some very serious problems in her personal life. Her sister Srilata who she was totally dependent on eloped with an unknown man without letting her sister get any idea about it. 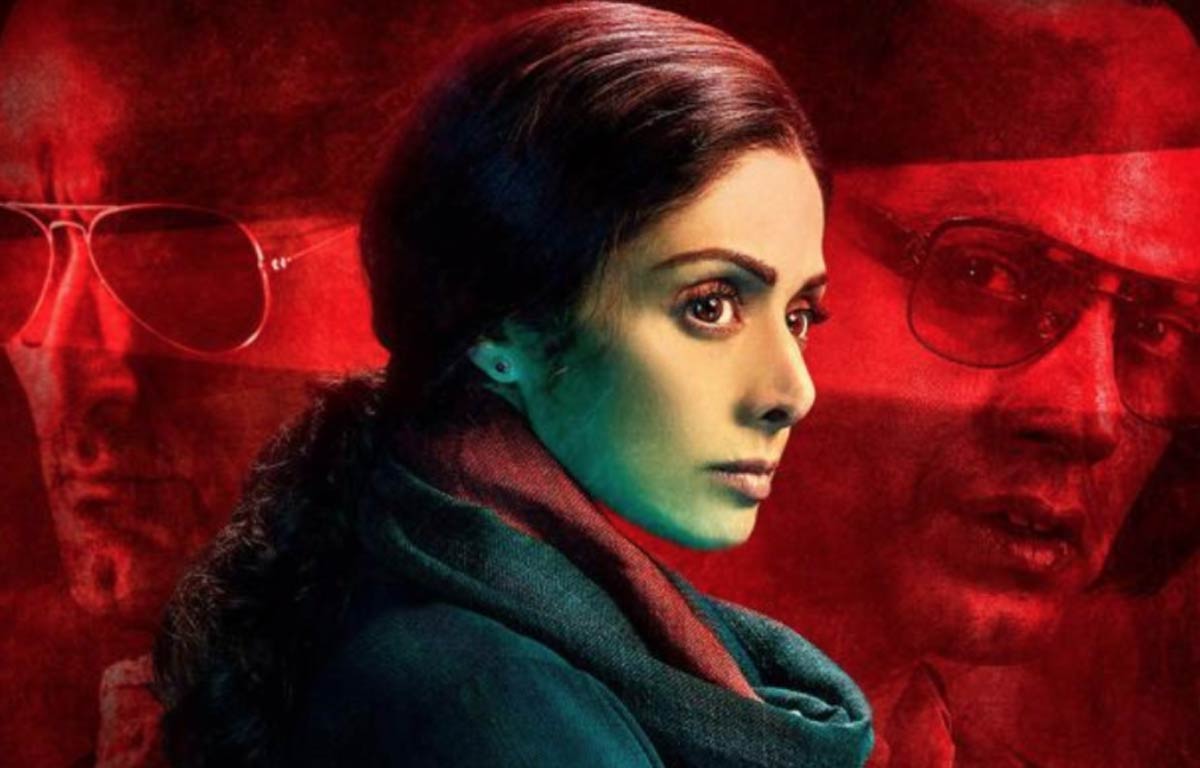 She even messed up some of her sister’s financial matters. She then lost her father and her mother who was very close to her was struck by an ailment which no doctors in India could diagnose. It was Boney Kapoor who came to her rescue.

He flew Sridevi and her mother to America and spent six months in a rented apartment only to take care of Sridevi’s mother.

An emergency operation was to be performed and Boney took the risk of signing the papers on behalf of Sridevi.

The operation went wrong and Boney went to court and won the case which got them a very huge amount of money.

Their long stay in America led them to fall in love, Boney divorced his wife Mona and married Sridevi 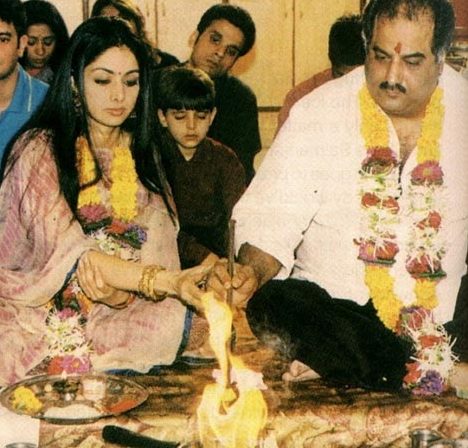 They now live a happily married life. Boney gave away his bungalow to Mona and their children and lives in an apartment close to his old bungalow.

Sridevi says she has forgotten all about her past because “I have no time to do anything but play the role of Mrs. Boney Kapoor and the mother of our daughter”.

Asked if she had anything to say about Boney launching his son Arjun (from Mona) as a hero, Sridevi says, “I am really very happy. After all, Arjun is also my son”.

This one statement is more powerful than all the communication and lack of talking people accuse her of. 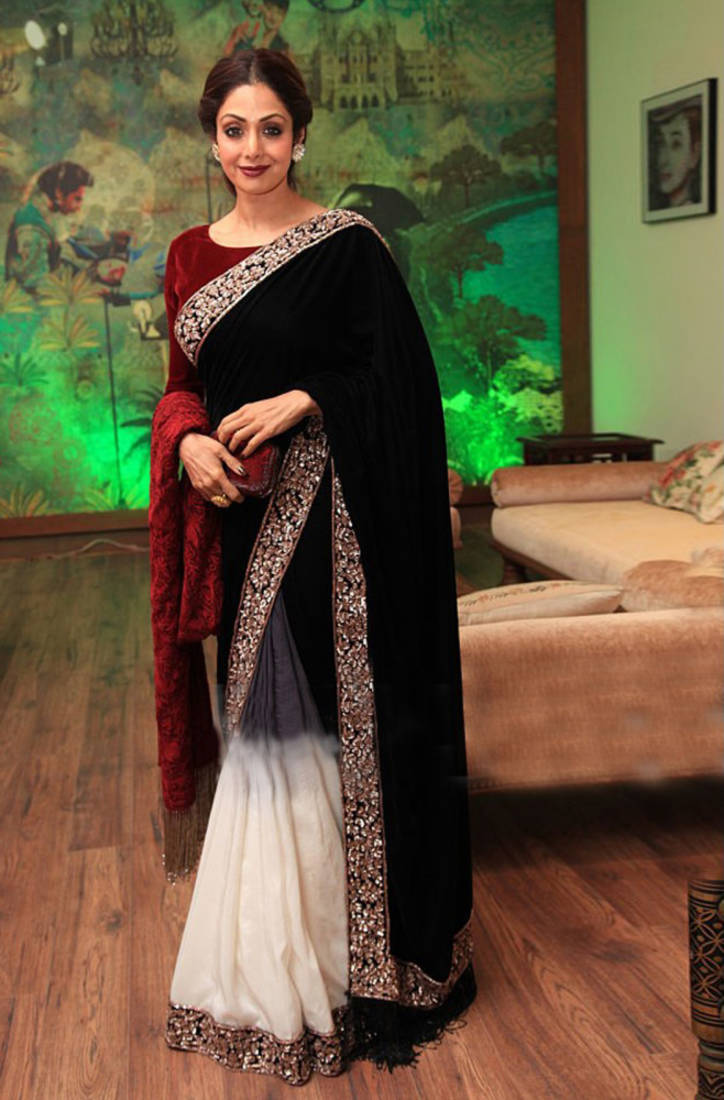 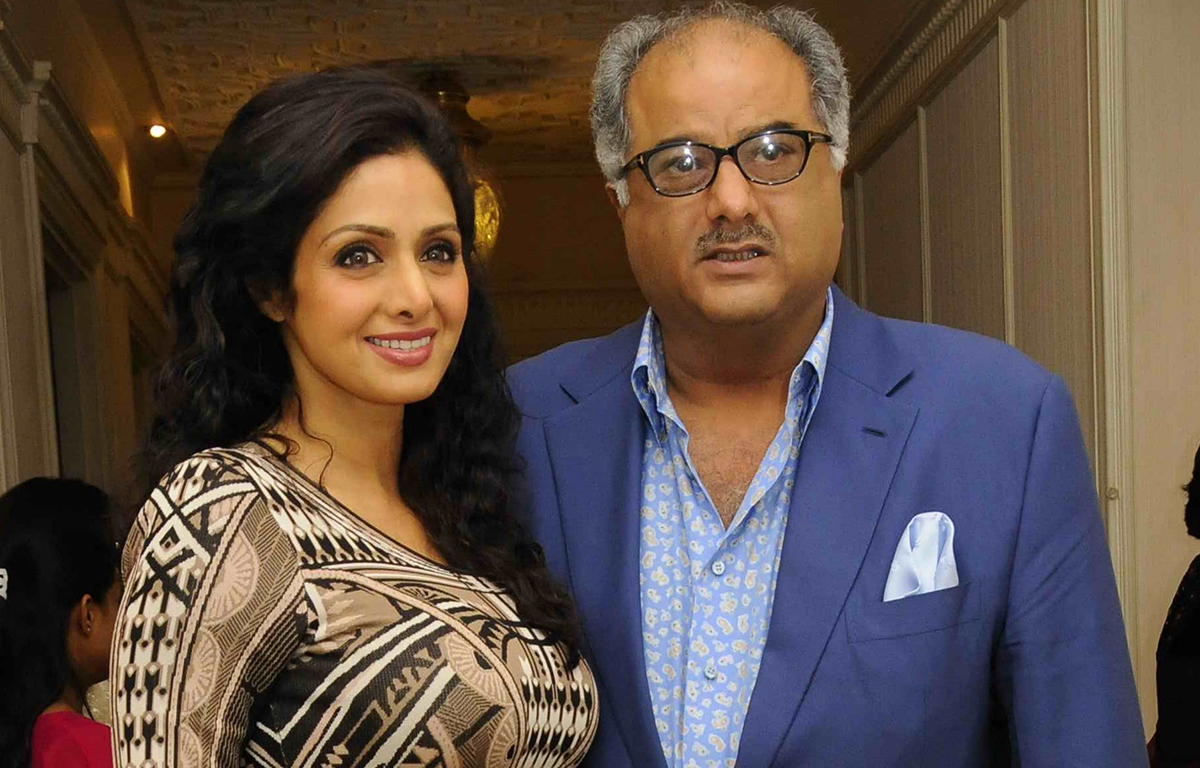 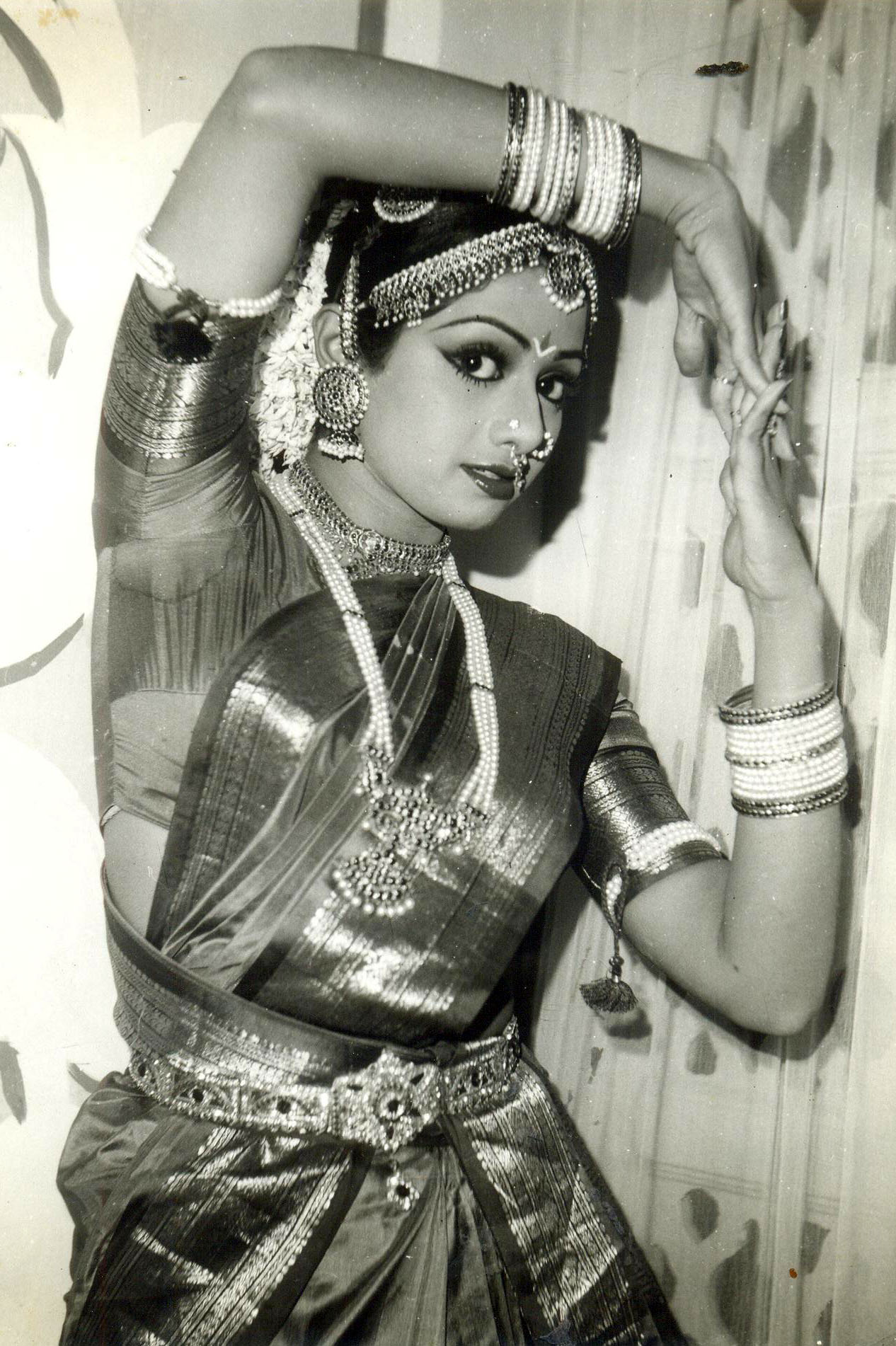 In a candid chat with Vijayendra Kumeria

TV folks talk about the book they fell in love with