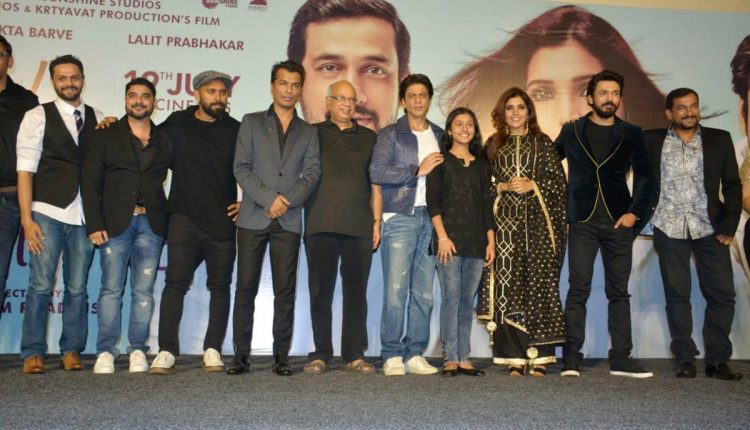 SRK Launches The Trailer Of The Marathi Film Smile Please

Life, as we know it, is a highway full of twists and turns. There are ups and downs on this road but we continue to live with hopes and optimism. We never stop living life fearing something bad is waiting to happen.

Vikram Phadnis upcoming directorial ‘Smile Please’, is based on this positive and optimistic approach. The trailer of the film, which features Mukta Barve, Prasad Oak and Lalit Prabhakar in prominent roles, was recently released at the hands of Bollywood superstar Shah Rukh Khan. Shah Rukh also launched the music album of the film amidst a splendid performance from music composers Rohan-Rohan and their team. Who’s who from the film fraternity were present at the grand event, including Priya Bapat, Umesh Kamat, Avdhoot Gupte, Bela Shende, Manasi Naik, Pushkar Jog, Rahul Pethe, and more.

Speaking at the trailer and music launch, Shah Rukh Khan said, “My friendship with Vikram goes back a long way. I told him one day to make a comedy film. He told me that this particular film was very close to his heart and that he had an emotional connect with the story. After watching the trailer, I realise the dedication, emotions and hard work that has gone into it. The seasoned actors as well as the beautiful music tugs at your heart’s strings and I am sure that this film will leave a smile on everyone’s faces after they watch it. The whole team has worked hard and that shows in the trailer. My best wishes to Vikram and team.”

The movie aims to give out a message about facing your struggles with a smile on your face, hence the title ‘Smile Please’. The trailer makes it clear that the Phadnis directorial revolves around love, friendships and complicated relationships. Mukta plays the role of a successful photographer who expresses through her clicks, while Lalit is a young, carefree guy who lives life on his terms. Prasad plays the role of a man who prioritizes work over everything else. The common thread that binds these three distinct personalities is what ‘Smile Please’ is made of.

Bollywood’s popular choreographers Bosco-Caesar have choreographed the dance sequences while Milind Jog is the director of photography of this movie that releases on July 19.