The birth centenary year of Dr Vasantrao Deshpande, renowned Hindustani classical vocalist and Marathi stage artist, who left indelible impression on theatre and films with his memorable compositions including “Bandish”, “Thumri” and “Natya Sangeet” and ruled the hearts of music lovers, begins from 2nd May 2019.The work of his disciple Pandit Chandrakant Limaye and his bondage towards his “Guru”, is well known. As such it would have been surprise if Limaye were not to take initiative to organise master class programs on the occasion of Dr Deshpande’s birth anniversary. Pandit Limaye, had set up the Vasantrao Deshpande Sangeet Sabha (VDSS) in 2000, to continue the legacy and cultural heritage of his Guru, who had command over “surs”, purity in singing and had capacity to captivate listeners with his mercurial and dramatic style of singing. To revive the memories of Vasantrao and take forward his heritage, Pandit Limaye has organised different programs. 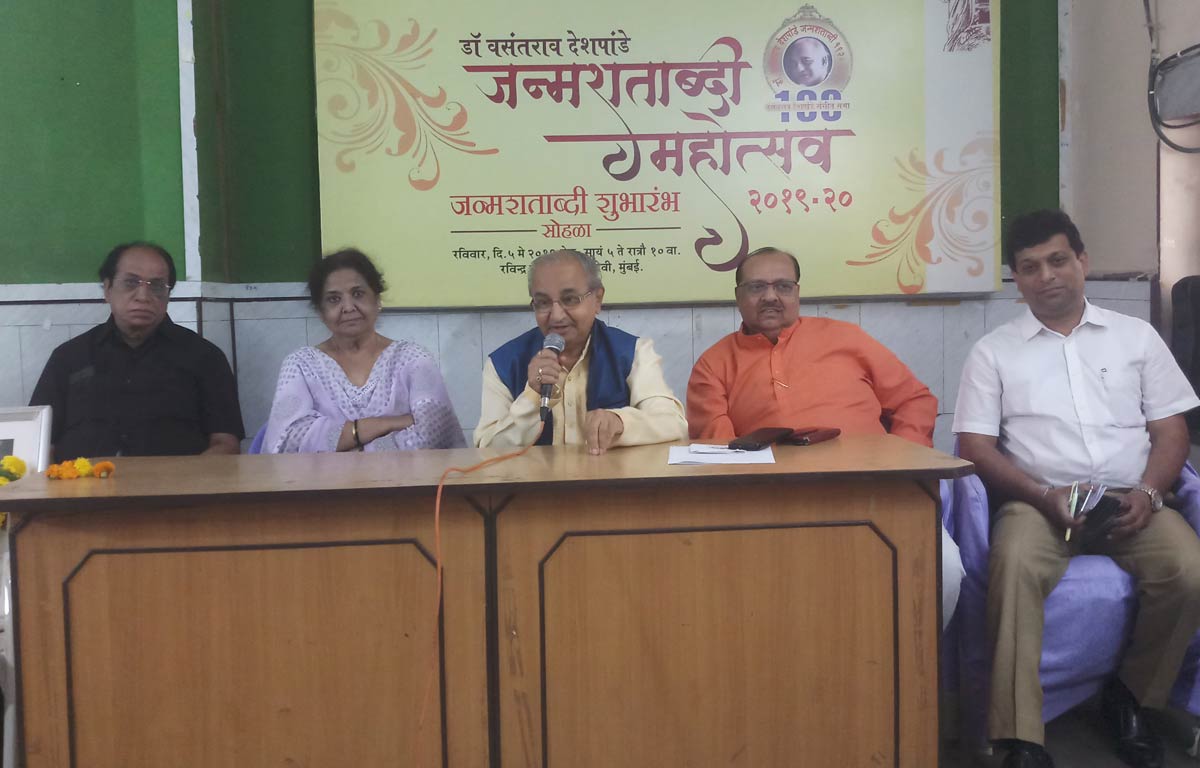 Pandit Limaye is the chief trustee of the VDSS, which has organised inaugural program on 5 May 2019, from 5 PM to 10 PM at Ravindra Natya Mandir, Prabhadevi. A special souvenir dedicated to Vasantrao will also be released in the program. Achyut Godbole, Pandit Shankar Abhyankar, Pandit Satyasheel Deshpande, Faiyyaz, former Police Commissioner Arvind Inamdar, former Lok Sabha Speaker and Maharashtra Chief Minister Manohar Joshi and others will be present. The speakers will revive the memories of Vasantrao on the occasion. As part of the function, a special program titled “Vasant Bahar”, throwing light on Vasantrao’s singing, will be staged. Pandit Limaye will perform with his disciples, the immemorable compositions of Vasantrao, including “Bandish”, “Thumri”, “Natya Sangeet” and film music, in an audio visual program. The audience will also get the opportunity to enjoy the songs by Nupur Kashid-Gadgil (Gwalior gharana) and Padmbhushan Pandita Prabha Atre. This program has been kept free for the audience on the occasion of birth centenary.The programs will be organised by VDSS also in Pune, Kolhapur, Sangli, Nashik, Solapur, Belgaon and Goa on the occasion of the birth centenary. Besides, workshops will also be organised.