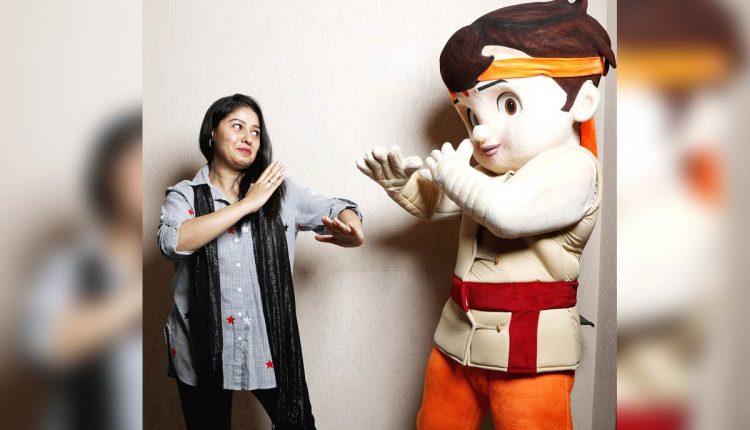 Sunidhi Chauhan has made her mark with her undeniable talent and mesmerizing voice. Adding another feather to her cap, she has sung the fun packed song called the Circus Jam Rap for the latest outing of film Chhota Bheem Kung Fu. A very popular character amongst children, it is one of the most awaited films. The song Circus Jam Rap revolves around Princess Kia who has been held hostage by the evil Zuhu. Bheem and his friends, disguised as circus folk, enter Zuhu’s den to rescue her. It is a fun and quirky circus jam that showcases acrobatics and groovy moves confusing the guards and opening the way for the Bheem troupe. With Sunidhi as the voice behind it, the song is yet another peppy number that will get kids all over to stand up and shake a leg! The song is composed by John Stewart Eduri. Sunidhi Chauhan says, “I thoroughly enjoyed working on the music for Chhota Bheem, a character we all have loved and adored. I personally am a big fan and am eagerly waiting for everyone to listen to the music. I am sure all the kids would have a wonderful time listening and dancing to the songs including my son!”

Rajiv Chilaka, CEO and Founder of Green Gold Animation, and the director of the movie, commented, “These two songs of Chhota Bheem Kung Fu Dhamaka couldn’t have gotten a better voice than Sunidhi and we are absolutely thrilled to have her on board. Her hypnotic voice brought the entire team under a spell and we can’t wait for her to cast her magic on all the audiences. The film is very special to us and we hope the viewer’s enjoy the experience.”The film is set in China and this time Bheem and his friends set out on an adventure in the Land of the Dragon to participate in the biggest Kung Fu competition in the world. However, the capturing of princess Kia by China’s arch nemesis Zuhu hinders the competition as Bheem is called upon to rescue the princess. Directed by Rajiv Chilaka & Binayak Das, produced by Green Gold Animation, distributed by Yash Raj Films Kung fu Dhamaka is set for the widest ever release for an Indian animation title in cinemas across India. Chhota Bheem: Kung Fu Dhamaka 3D releases in theatres on the 10th of May, 2019.

“Today, The Making Of A Film Is Very Easy But Marketing It Is Tough”- Shantanu Tambe