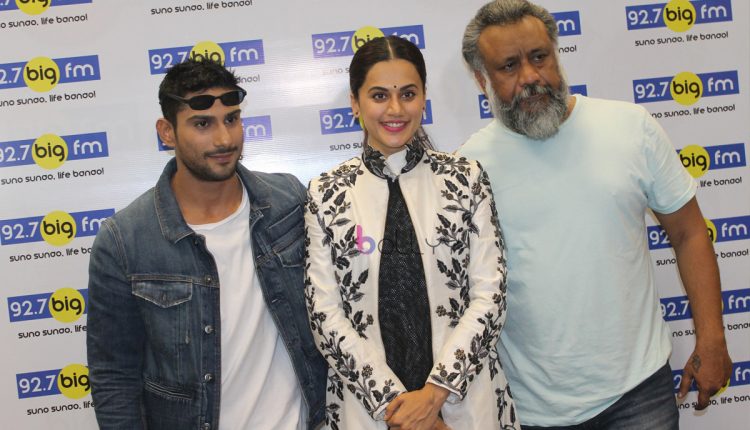 B-Town is abuzz with the release of the highly-awaited film – ’Mulk,’ which has been based on an eye-opening real life story. The promising starcast comprising actors such as Rishi Kapoor, Tapsee Pannu and Prateik Babbar, has already raised the expectations among film critics and movie enthusiasts. As the day of the release draws closer, the star cast of the film visited 92.7 BIG FM for a meet-and-greet with the fans and shared some interesting tidbits from their soulful journey, encapsulating the struggles of a family.

Tapsee Pannu, Prateik Babbar and Director Anubhav Sinha were seen in a happy mood as they interacted with the audience at 92.7 BIG FM studio. Tapsee and Prateik shared some behind-the-scene details about the film and their experience of working with Bollywood’s one of the most senior and renowned actors – Rishi Kapoor. The meet-and-greet session concluded on a positive note as the audience vouched for the film’s success and expressed their interest to watch the film upon its release. The in-depth conversation of the cast can be heard on 92.7 BIG FM on BIG MJ Anirudh’s show ‘Anirudh LLB Uncensored’ on 3rd August between 10pm-12am.

Speaking about her role Tapsee Pannu said, “It’s a film that every Indian should watch and not miss it. Anubhav Sir has done a phenomenal job and complete justice with the film. I’d also like to thank BIG FM team from the bottom of my heart to have celebrated my birthday today with everyone.”

Speaking about his role, Prateik Babbar said, “Mulk is a film that every individual will resonate with. An extra-ordinary story of an ordinary family, so well displayed by a great director himself, Anubhav Sinha. I request all Indians to go and watch the film.”

Gurmeet Choudhary gets emotional at the trailer launch of PALTAN !