National Award winning actress Tanvi Azmi is all set to return to the small screen after 10 long years. Tanvi who was recently seen in Guests in London has been roped in to play lead role in the Hindi adaption of Tamil soap opera Vani Rani. She will be seen essaying the character of the two sisters, Vaani and Raani. As the story unfolds, the stark difference in their outlook towards life will be highlighted through the ways they deal with their problems in their life. The show will premier from August 7 on And TV.

In an interview with the media Tanvi said, “I took up this show because it sounds interesting and worth of my time. I’ll be seen in a double role for the first time, I am excited about it.”

Tanvi Azmi aka Radhabai of Bajirao Mastani has worked on several TV serials in 90s. Her famous TV shows were Mirza Ghalib, Kahkashan, Zameen Aasmaan, Lifeline and Family No 1. With this new show Tani is again  ready to create the magic on small screen.

Vaani Rani, the original Tamil show, is one of the longest running and highest rated family show on Sun TV. In the show’s Tamil version, Radikaa Sarathkumar was cast as the lead. This show is a story of two identical twins, who are different in every way possible. They both get married in the same house with brothers played by Iqbal Azad and Sanjay Gandhi. The rest of the cast includes names like Diya Aur Bati Hum actor Rahulram Manchnada, Yeh Vaada Raha actress Rashmi Gupta, Ek Tha Raja Ek Thi Rani actress Rose Sardana, Jatin Bhardwaj and Jitendra Nokewal. 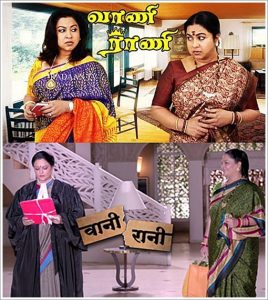 The Tamil version has sustained for more than 4 years and still holds a large viewership. What do you think the fate of this one will be?

LUCKNOW CENTRAL—THERE’S NO ESCAPING THIS ONE!

HAWAYEIN: NOT JUST A SONG, IT’S A REVOLUTION FOR LOVE AND LOVERS

Aamna Sharif to mark many firsts with Damaged Season 3; deets inside

MX Player drops the trailer of Bhaukaal 2, inspired by the life of IPS officer…

“Ultimately, you need to be happy, and that is the key to…