Tiger Shroff is not just popular and famous among the grown-ups but he also inspires youth and all thanks to his power packed action and great dance moves.  At this time of age when kids are addicted to mobile phones and gadgets, the actor motivated many teenagers and kids to take part in Martial Arts. Tiger Shroff has already invested in the team Bengaluru Tigers of the Super Fight League last year, to promote and popularise Mixed Martial Arts (MMA) in the country. And now when people are getting inspired by him and showing  interest towards physical activity, he will be now taking his passion project a step further.

Tiger has decided to collaborate with British boxer Amir Khan for an anthem dedicated to the MMA fighters in India. According to a leading daily, a source revealed that,  “Tiger Shroff and Amir will shoot the song in akharas in the interiors of north India. The sports-centric dance video will be choreographed by an international team of experts, and will also feature international boxers.” 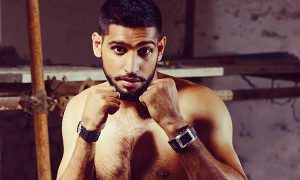 Bill Dosanjh and the producers who brought the boxing league to India last year are willing to release the song in different languages so that it can connect to the audience worlwide and reach every part of the country. “Singers from different regions will be locked. Shaan, Benny Dayal and Neeti Mohan may be roped in. Salim-Sulaiman will compose the track,” added the source.

It has been learnt that the music video will be shot in June this year.

ALIA BHATT TURNS 25, HERE IS HOW B-TOWN WISHED THE ACTRESS

GAUAHAR KHAN TO LAUNCH HER CLOTHING LINE ON MOTHER’S BIRTHDAY