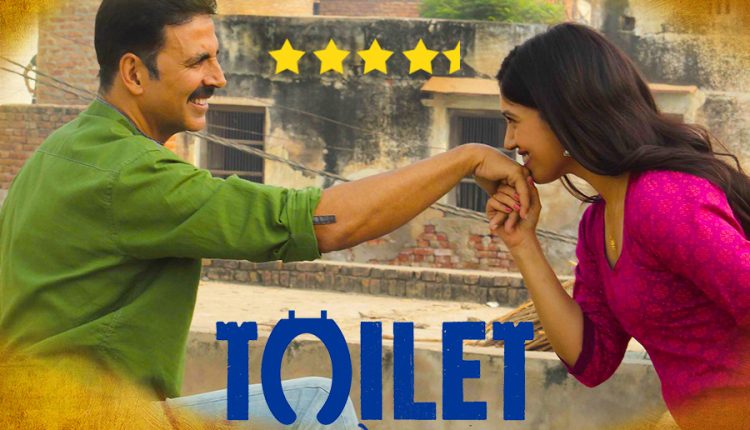 Having watched Toliet: Ek Prem Katha today goes down as one of the best decisions I’ve taken in 2017. No Kidding. To be able to write a review for the film feels nothing less than a privilege because only once in a blue moon does a film actually manage to deliver what it has promised to without losing sight for even a moment. The film is not just acknowledging the issue of open defecation, but is easily breaking stereotypes.

Toilet: Ek Prem Katha is a love story indeed, of  Keshav (Akshay Kumar) and Jaya (Bhumi Pednekar) based in a village of Uttar Pradesh, but the bone of contention in their struggle to stay together is not a person but a toilet. Keshav is a 36-year-old really keen on getting married but hasn’t been able to because his Kundli won’t let him. If that wasn’t enough, his father, Panditji (Sudhir Pandey), is looking for a bride with two thumbs. Keshav also has a hilarious brother, Naru (Divyendu Sharma), and together their family owns a cycle shop.  Jaya, the only child in her family, is sorted, well-educated girl who has topped the state in BCA. Bhumi portrays the role with perfection, her accent and emotional upheaval are on point throughout. And we cannot miss mentioning Anupam Kher, who plays Kaka, a friend, philosopher, and guide in her life.

The basic plot is exactly what is fit into a 3.01-minute long trailer but it’s the way the film progresses, not wavering for a second, keeping the premise intact and living up to its title every step of the way, that is worth the watch. Keshav falls in love with Jaya and of course, his stalking skills are on point and Jaya not only notices but confronts him for the same. The girl isn’t a victim here. In fact, she is someone who takes a stand and gives back whatever is thrown her way. It’s the comeback that Jaya’s character makes after having realised Akshay’s true intentions that is applause-worthy. She is then determined to win him over in his own style.

After ‘toilet’ and ‘prem katha,’ another pivotal idea that is explored in the film is ‘jugaad’. Yes! after having somehow convinced their parents and getting married, the film follows Jaya and Keshav’s struggle to somehow get the former to a closed toilet every morning. Each time Bhumi raises her voice to ask for this basic right, Akshay tries to arrange for a make-shift solution to the problem. This continues till one day, the bride puts her foot down. Besides open defecation, the film also acknowledges and tries to counter other established notions like the negative image of men from small towns, superstitions that prevail in society, and women not standing up for each other.

1. Not all men are the same. Keshav is a 12th pass from Mathura but doesn’t make him a nasty man. He’s a supportive husband and believe you me, he goes to all possible extents for his wife.
2. The society is blinded by its own beliefs and established notions which must be questioned.
3. The accent of man does not define his/her character.
4. Women seldom do not come out in support of each other, we can’t blame men for everything that’s going wrong in our lives.

Director Shri Narayan Singh does an impeccable job with bringing out the best in every character. Akshay and Bhumi are irreplaceable an so is their chemistry. We wouldn’t mind seeing this pair on screen again. While Akshay is in the best phase of his life, in terms of delivering superlative performances, this role is just another feather in his cap. Bhumi comes as a breath of fresh air and no body can question her acting capabilities. Anupam Kher and Sudhir Pandey are impeccable, as usual. Divyendu Sharma has the best punches and he wouldn’t let you stop laughing.

Siddharth-Garima of Goliyon Ki Ram Leela- Ras Leela fame have written the story and they’ve given life to the film with the perfect narration and the flawless characters. Every character is in his own space, not wanting to steal other’s limelight and yet enthralling the audience. Keshav wears branded clothes just that Puma becomes ‘UIMA’ and Levis becomes ‘Evil’s’. The film has the perfect blend of emotions, the second it makes you sad, the very next second it cracks you up. It’s bewildering how every nitty gritty detail is paid attention to, from the placements of utensils in the kitchen to how the soap cases are kept in the courtyard. The cinematography is so on point that you’re left gobsmacked at most of the scenes, particularly the drone shots which are taken with utmost perfection and finesse. The dialogues are raw but not cheap and lame. UP after a long time has been shown in good light which it most certainly deserves.

At no point are the characters over doing their bit or does the story seem too long. The film is an amalgamation of memorable performances, intelligent writing, and witty dialogues.