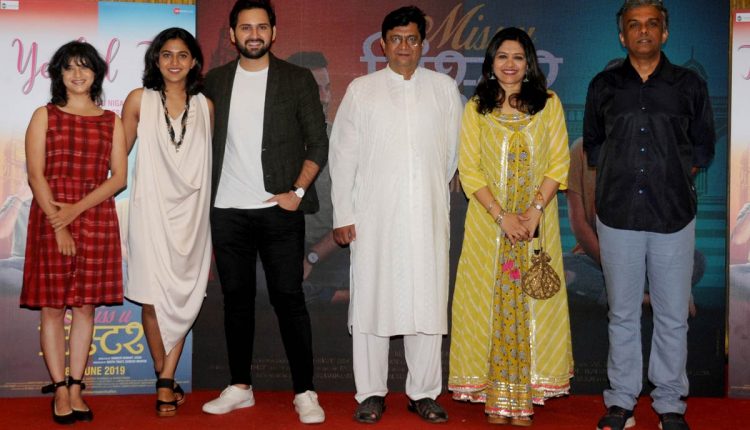 The Marathi film Miss You Mister to be released on June 28, has created a buzz in Marathi film industry because of the glamorous Next Gen pair of Siddharth Chandekar and Mrunmayee Deshpande in the lead roles. The launch of the trailer and release of the music of the film was held in Mumbai. Music director Aalap Desai and singer Anandi Desai presented songs written by lyricist Vaibhav Joshi from the film giving the event a unique touch. Produced by Deepa Tracy and Suresh Mhatre, and co-produced by Keval Handa, Sandeep Bhargav and Manish Handa. Miss U Mister is presented by Mantra Vision with the co-presented by Third Eye Creative Films. The movie stars Rajan Bhise, Savita Prabhune, Avinash Narkar, Radhika Vidyasagar etc. The trailer released by the producers has leading actors Siddharth Chandekar and Mrunmayee Deshpande playing characters Varun and Kaaveri in it.  The married couple is separated, as depicted in the trailer, as Varun has to go to London for office work leading to a long distance relationship. The relationship develops tension and complications due to the short term separation. How does the couple tackle such complexities? The entire story line of the film is based on the Long Distance Relationship and it is highlighted in the trailer. The film assures to talk about their own story for the couples who are living separated from each other. It will also be useful for the newlywed couples.

‘Wadhanarya Antaratun Fulnare Prem’ (the love flourishing out of distance) is the tagline which flashes out with the teaser. It depicts the story line of the film, which revolves around the lifestyle of today’s young couples who are compelled to live apart from each other due to their career priorities. The distance makes love flourish more intensively, while sometimes it leads to the tension between the relationships. The story touches upon all these aspects while handling it in the way the youngsters follow the lifestyle today.

Sprightly Mrunmayee Deshpande, said, “I am playing the lead role of Kaaveri in the film representing today’s young generation. The story is about how the couple copes up with the challenges and complications that temporary separation brings into their lives. The relationship between the husband and wife has been subtly handled in the film, whose title itself is adequately suggestive about the storyline.”Siddharth Chandrakar said, “Mrunmayee and I have acted together in one act plays during our college days. I enjoyed working with her, a very talented actress indeed! I am playing the lead role of Varun in his film. What’s impressive about our director Sameer Joshi is that he gives full freedom to his actors. The production standards of the film are very high and I am sure that the audience too will like the film.”Elaborating on the story of Miss U Mister, Sameer Hemant Joshi, director of the film says, “This is not only the story of Varun or Kaveri, but it relates to every such person living away from the loved one. In this kind of a circumstance, it may lead to strain in the relationship physically as well as emotionally. But what does one need to do to lessen this? The movie has subtly touched upon the solutions.”

Mantra Vision is a multidisciplinary production house creating fresh, relevant and reverting high quality contents for films, digital media, television, commercial production including Dance – Dramas like Urvashi. Deepa Tracy and Suresh Mhatre are the producers of the Miss U Mister. Deepa Tracy has the experience of over four decades in business of garment and exports. She has produced films, dance drama and TV serials. She is a self made entrepreneur. Suresh Mhatre hails from advertising field. He has more than 250 corporate and advertising films to his credit. With a degree in Engineering and Management, Mhatre has been in the corporate world for more than 4 decades. The Company in association with Tulsea  has produced a Hindi Feature Film, “Sulemani Keeda”  in 2014 under  Director’s Rare Project, which was presented by PVR.Besides the direction of the film, Sameer Joshi has written this film too. Bus Stop (2017), Mamachya Gavala Jauya (2014), Mangalashtak Once More (2013) are the popular films by Joshi. Be Dune Daha, Priti Pari Tujwari and Ek Number are the TV serials on Star Pravaah and Crime Patrol, Saas Bina Sasural and Kishanbhai Khakarewala on Sony channel were the serials written by him. He has also penned Jeewan Saathi on Colors and Bhatkanti on Zee Marathi.